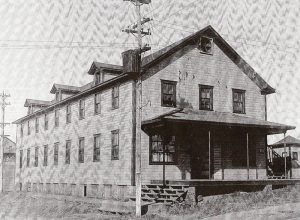 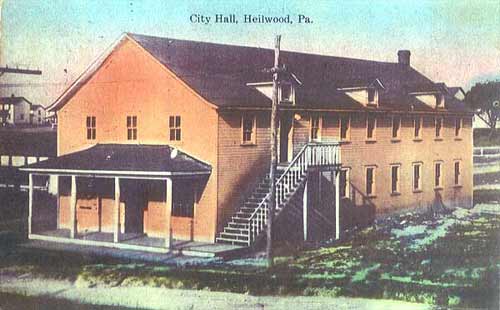 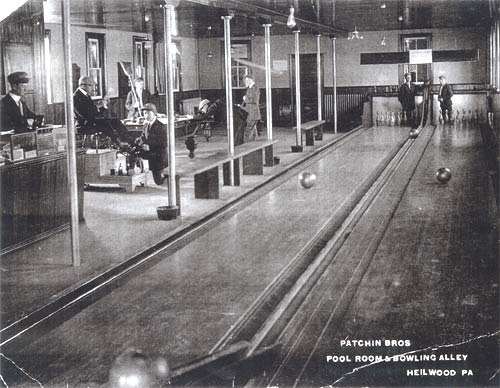 Interior of the town hall, showing the pool room and bowling alley. 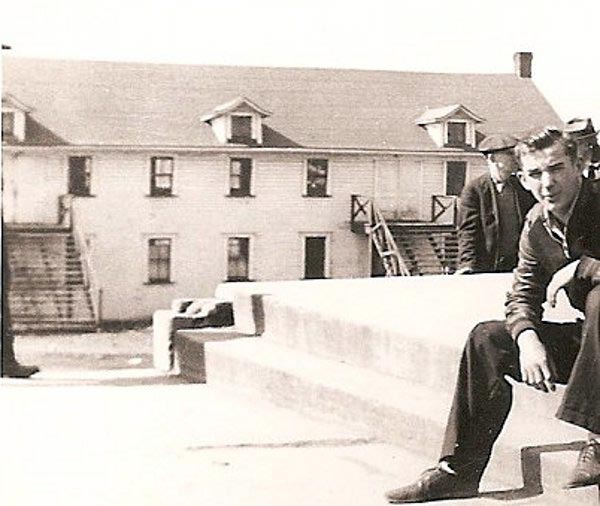 These folding chairs were probably purchased from the Heywood Brothers & Wakefield Company of Philadelphia in the summer of 1907 by the Red Men. They were utilized on the second floor as portable seating for town meetings, as well as school and other community activities. When the Town Hall was closed around 1940, some of these folding chairs were obtained by the St. Peter’s & Paul Greek Catholic Church and used there until the church was closed.

In order to provide the community with a place for social activities, the coal company built the Town Hall in the spring of 1907.

The building was 80′ long and 30′ wide, two stories, with a wood frame construction, electric lights, and steam heat. The actual builder is not known, but the wiring was done by the Punxsutawney Cycle Company and Freas Cyclery – both from the Punxsutawney area. The steam heating system was installed by the Indiana Hardware Company of Indiana, Pa. And in the summer of 1908, possibly as a deterent to break-ins, all of the bottom window sashes were covered by window guards, constructed with #10 wire and 2″ mesh, from Logan-Gregg Hardware of Pittsburgh.

On the first floor of the building there were two bowling allies, a couple of pool tables, a two-chair barber shop, and a storage room. This storage room would later be utilized as an elementary school classroom, due to overcrowding in the actual school.

The note is circa 1918 and talks about Mr. Donahue (the Town Hall manager) and roller skating.

Ticket from a 1926 performance at the Star Theatre (second floor of the Town Hall).

Program from a 1925 performance at the Star Theatre

A Pennsylvania Department of Labor and Industry Motion Picture Projectionist’s License #843, issued January 1, 1928, for Jim Donahue. Mr. Donahue showed movies in the upstairs portion of the Town Hall (sometimes referred to as the Star Theatre).

The second floor, which in later years was referred to as the “Star Theatre” (see ticket) was an open area that seated almost 300 people. In the winter of 1907, a stage was added on one end. A wide variety of activities took place in this area, including traveling vaudeville acts, roller skating, movies, and town/safety meetings, as well as programs from the public schools. In addition, the Roman Catholic Church held Sunday masses here until the coal company built it a new building in 1909. On January 9, 1926, a fire severely damaged the interior of the town’s Presbyterian Church, making it necessary for the church to conduct services in the Town Hall. These services continued until November 28, 1926, by which time Bethlehem Mines completed repairs to the church.

In 1933, the basement was converted into a 75-foot, small-caliber rifle range. Rifle matches continued until 1941.

In the early hours of March 5, 1934, the Roman Catholic Church caught fire and burned to the ground. So once again, it became necessary to conduct religious services on the second floor of the Town Hall. These services continued until 1937, at which time the floor of the Town Hall was deemed unsafe, and the services were moved to nearby Cameron’s Bottom. Later that year, a new stone Roman Catholic Church was completed in Heilwood and ready for services.

The Town Hall remained on the Pine Township/Heilwood tax records until 1940. It’s exact disposition at this writing is not known.