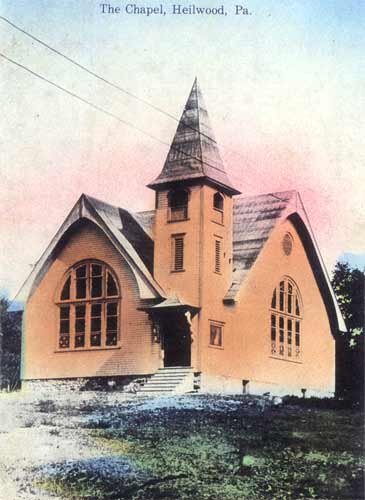 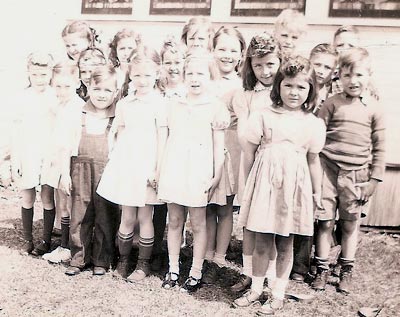 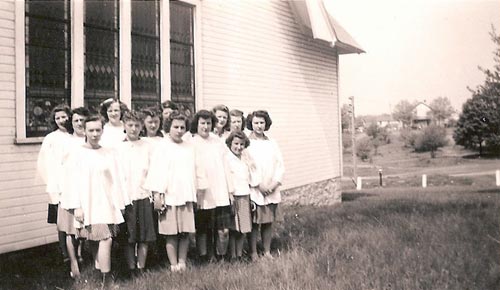 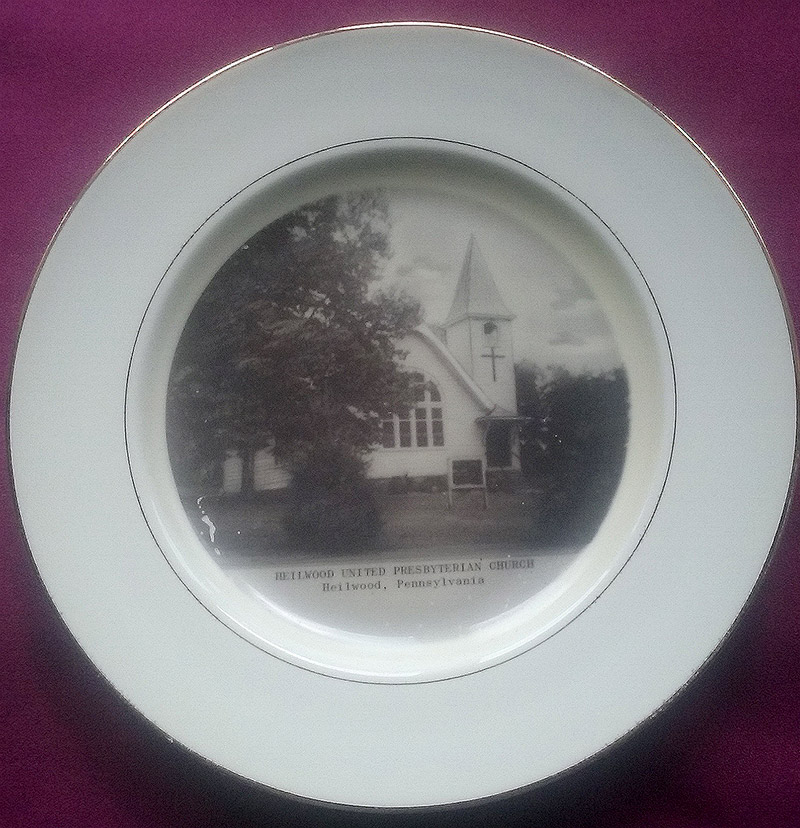 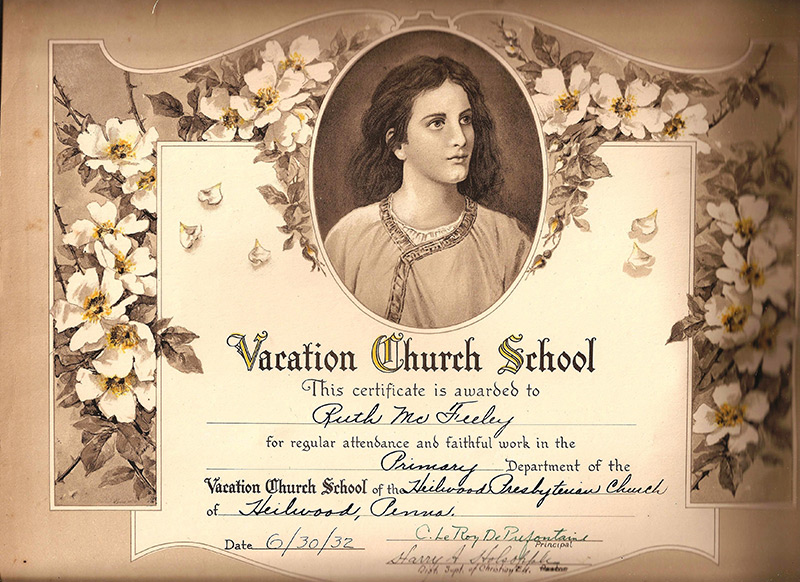 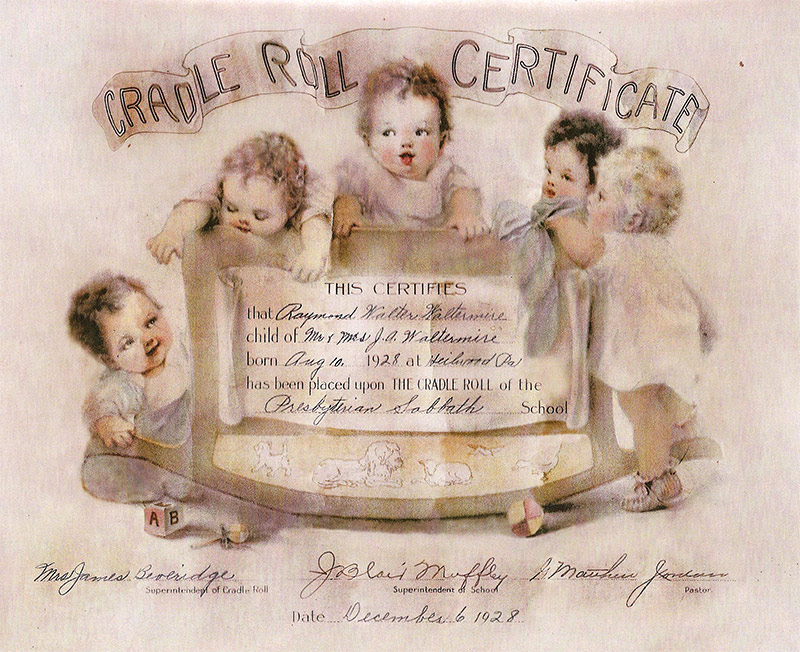 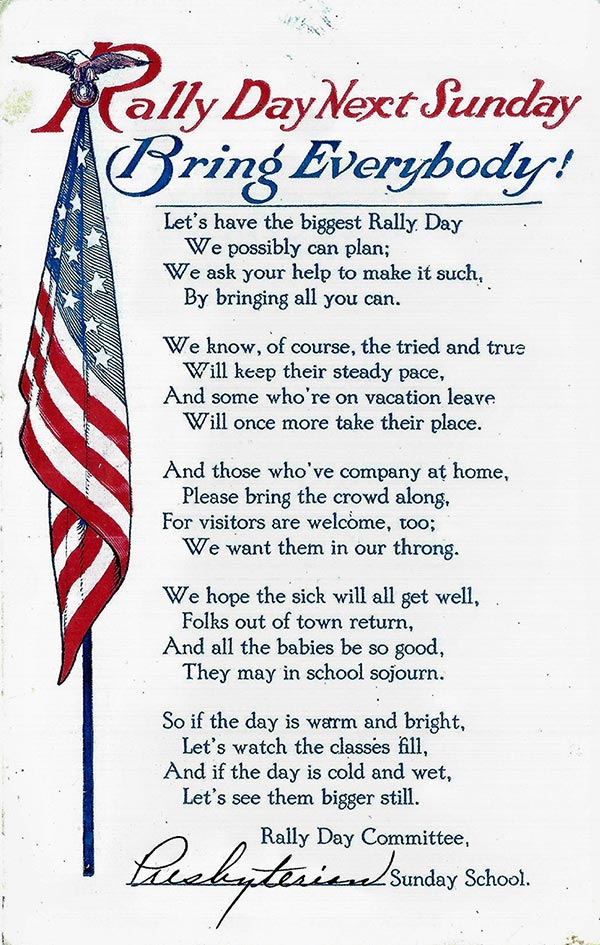 According to Penn Mary Coal Company records, the Protestant church was under construction in the summer of 1907. While the specific builder is not known, we do know that the Punxsutawney Cycle Company and the Freas Cyclery, both from Punxsutawney, were wiring the building, and Indiana Hardware of Indiana, Pa. was installing the heating system. The A. H. Andrews Company of Chicago supplied the pews.

The “union church” (as it was initially known) served Heilwood as a gathering place for many denominations. Without a permanent minister of its own, the church was served by various area ministers. Reverend J. A. Lesh, from the Indiana, Pa. Normal School, provided leadership in 1910 and 1911, and the Reverend H. L. Smith followed, serving from 1911 to 1912. At this time, a meeting was called to discuss the church’s organization, and after considerable discussion the congregation unanimously decided to ask the Kittanning Presbytery to organize a Presbyterian church in Heilwood.

Reverend Dr. John B. Worrall of Cherry Tree, Reverend William J. Sproull of Penn Run, and Elder W. N. Nelson of Clymer were appointed by the Kittanning Presbytery to form the requested organization, and on October 24, 1912, the Heilwood Presbyterian church was effected!

For the next 11 months, various supply preachers and elders would once again lead the worship. On October 13, 1913, the congregation met and by a unanimous vote called upon Reverend Daniel Clifton Schnebly of Cherry Tree to be the first pastor at Heilwood. He was offered a salary of $900, plus free rent/lights/water/coal and a four-week vacation, for 3/4 of his time (the other 1/4 of his time was to be given to the Nebo church). On December 9, 1913, Reverend Schnebly was duly installed by the Reverend A. L. South from the Clymer Presbyterian church.

But this arrangement didn’t last. In March 1915, the congregation reluctantly met with Reverend Schnebly to act upon his request that his pastoral relationship with both the Heilwood and Nebo churches be dissolved.

The congregation met on July 17, 1915 and voted to call the Reverend Jonathan C. Kelley of Darlington, Pa., to become the new pastor. He accepted and was installed as the second pastor of both the Heilwood and Nebo charges in August 1915. The next two years would be a time of growth and turmoil in the church. Membership was reported at 73 and Sunday school attendance was 126. However, as Reverend Kelley wrote:

The town has passed into the hands of a new company with a new management who does not attend the church services. There is some Sunday work and a licensed saloon added to speakeasies to demoralize men and make Christian work more difficult. Many are moving in and out and hence our community has been unsettled and church attendance and additions have been seriously affected. Our membership is 61, but 25 of these have moved away… we labor under great difficulties.

Despite these difficulties, the remaining church members were faithful! Attendance at Sunday school grew to 166 members. Even so, on April 8, 1917, Reverend Kelley asked for and received his release by a nearly unanimous vote of the members.

Reverend Robert Fulton Sterling of Dauphin, Pa. was then asked to be the new minister. He accepted and was installed on September 28, 1917. The next several years saw an increase in both members and contributions to the church, as it climbed out of debt. All was well until March 1919, when the church was ordered closed by the local Board of Health due to the influenza epidemic. This closure had a profoundly negative effect on church membership!

On July 31, 1919, the pastorate of the Reverend Sterling ended as he had accepted a call from the Marble Church in Broomall, Pa. Within three weeks, the call went out to Reverend William Gray Alter of Glen Campbell, Pa. to become the new minister. But his pastorate was cut short by ill health, and he resigned on January 30, 1921. Reverend L. E. Duffield of the Cherry Tree church was appointed moderator of the Heilwood church until a new pastor could be installed.

Reverend Walter E. Ruch from the Sharpsville Baptist church was the next minister, asked to serve on July 3, 1921 and installed on July 22. The next several years saw a rebound in both membership and Sunday school attendance. It was during this period of growth that a local coal strike resulted in the Governor of Pennsylvania stationing over 100 National Guard troops in the community to “preserve and maintain the peace.” The Heilwood Presbyterian church reached out to these troops by reserving a section of seats for those who attended Sunday services.

The years 1924 and 1925 saw the high-water mark of both church membership and Sunday school attendance – the former reached 154 and the latter 194. But on Saturday evening, January 9, 1926, a fire was discovered in the church, and although it was brought under control without loss of the structure, the interior suffered damage of about $5,000. Church services were subsequently moved to the Town Hall and Sunday school was held in the local public school. The Bethlehem Mines Company took responsibility to have the church repaired. 11 months later, on November 28, 1926, the newly repaired church conducted services with special music and a sermon by Reverend R. M. Offutt of the Kittanning Presbytery. Church membership suffered during this period, with membership reported at 112 and Sunday school enrollment at 124. Reverend Ruch preached his final sermon on May 29, 1927.

The pulpit was vacant for the majority of the next three years with the exception of the one-year pastorship of Reverend G. Matthew Jordan. On October 19, 1930, the congregation extended the call to the Reverend C. Leroy Deprefontaine. His installation service took place on January 21, 1931 after which the clerk of the sessions, J. R. Duncan, noted that, “This seems to be the beginning of a wonderful pastorate.” The following years proved those words to be true. The church grew in membership and evangelism, and the Sunday school formed their own orchestra. On October 3, 1937, the congregation met and dissolved pastoral relations between Reverend Deprefontaine and the Heilwood church.

Following the departure of Reverend DePrefonatine, the pulpit remained vacant for some time. Reverend David I. Schaeffer was elected as a stated supply and Reverend William Mooney acted as moderator until World War II. With a scarcity of available ministers, various seminary students from Western Theological Seminary in Pittsburgh assisted the church.

On June 2, 1946, the congregation extended a call to the Reverend Albert G. Kountz, who was installed as the church’s eighth full-time pastor. Serving the church for only a short time, he and his wife were killed in an automobile accident outside of Indiana, Pennsylvania. Once again, the pulpit remained empty until the next full-time minister was selected in the late 1950s.