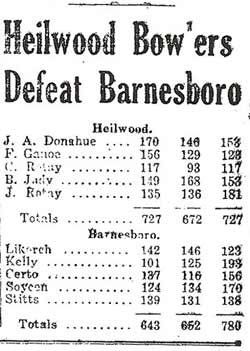 Bowling score from the April 28, 1930 issue of The Indiana Gazette.

Several brief newspaper articles from December 1915 and January 1916 suggest that Jim Donahue organized a bowling club with six teams, which bowled three games a week. At the end of 15 weeks, the team with the best average was to be awarded a prize. However, more complete information about this organization has yet to be found.

Although no records from this era indicate an organized league, it’s quite possible that Heilwood had an organized bowling team. There is a mention in the April 28, 1930 issue of The Indiana Gazette that the Heilwood bowlers defeated Barnesboro by a score of 2126-2075, over three games.

The following players were bowling for Heilwood that day: J. A. Donahue; F. Ganoe; B. Judy; C. Ratay; and J. Ratay. In all likelihood, this bowling match involved the use of duck pins.

No other records can be located to indicate other matches, but it’s quite possible that as with tennis, Heilwood participated in team play against various teams in the Cambria County area, and that these matches were either unreported or not published.