Natassin Tribe, Lodge #488, Improved Order of Red Men, Heilwood, Pennsylvania. This photo (circa 1910) was taken on the front steps of the Barber Shop. The door on the left side led to the second floor, where they conducted meetings. 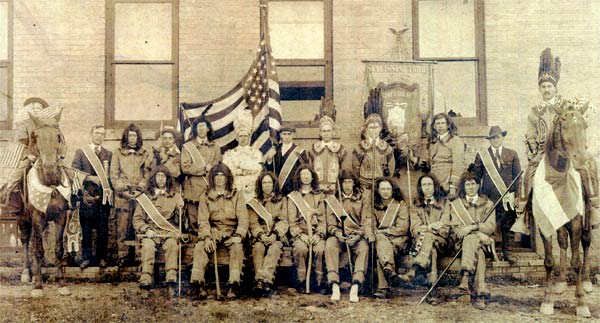 Another photo of the Natassin Tribe, date unknown. 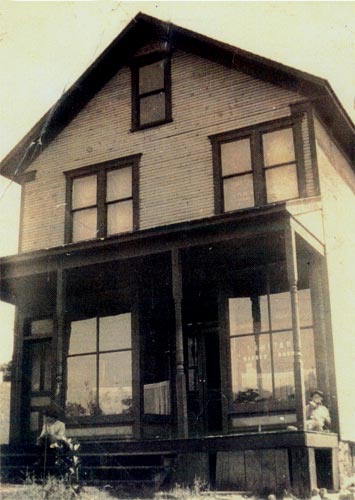 The town Barber Shop showing a sign in the front window reading "Sanitary Barber Shop" (circa 1920) . In the second floor window (second from the right) there is a banner for the Red Men of Heilwood. 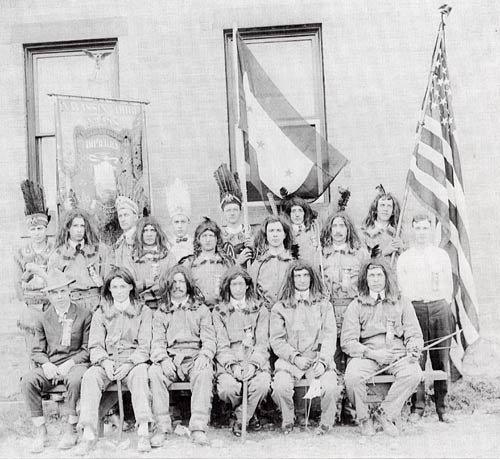 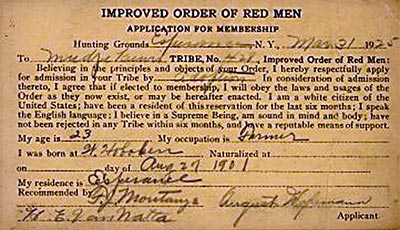 An application for membership in the Improved Order of Red Men.

According to available records, the Red Men Lodge in Heilwood was organized around 1907. Known as Natassin Tribe – Lodge # 488 (see photo) its members were a part of America’s oldest fraternal organization.

Tracing its origins to 1765, the Red Men were originally known as the “Sons of Liberty.” The members concealed their identities and worked “underground” to help establish freedom and liberty in the colonies. Disguised as Mohawk Indians, these were the same Sons of Liberty who dumped British tea into Boston Harbor in protest of the Tea Act of 1773. During the Revolutionary War, many of these “secret societies” also took up arms against the British.

It wasn’t until about 1812 that the Society of Red Men was organized, which later became the Improved Order of Red Men. By the 1920s, the organization had over 500,000 members!

In order to be a member of the organization, a number of conditions had to be met. The potential member had to be male, white, a citizen of the United States (or having made a declaration of intent), had to be able to speak and understand the English language, and had to be of good moral character. With these conditions, the majority of Heilwood’s immigrants were ineligible. In addition, with the economic demands of joining and belonging to such an organization, most of the miners were also dissuaded from membership. Therefore, most of those joining the group were the so-called middle class/Protestant townsmen.

This Heilwood Red Men membership ribbon was usually worn as shown on top, but members could also remove the cloth part and turn it over to reveal a black side (bottom), which was worn when attending funerals or wakes of members who had passed.

Membership in the Red Men, along with its secret passwords, complex rituals, and costumes/regalia, provided not only social interaction, but also financial benefits in the form of “sickness and funeral” payments!

Utilizing records found at the national Red Men headquarters, it is known that Heilwood’s Natassin Tribe met during the week, in the evening hours. The exact location of these meetings remains a mystery, with the exception of some meetings held on the second floor of the town Barber Shop.

The only membership list that can be gathered consists of anyone who held a particular office within the organization and had contact with the national offices. In this regard we can list C. Kelly, L. Faust, W.R. Bathurst, G. Bangham, R.E. Muffley, T.Fletcher, F. Lamberson, and C.D. Smith.

As for the number of members, the only available records indicate that there were 57 members in 1918 and 54 in 1919. It should be noted here that the “star banner” held in the center/back row of a photo on this page indicates that three members from the Heilwood lodge were in the service of their country: T. Dixon, L. Lambing, and J. Ross Johns. The photo was therefore probably taken between 1917 and 1919.

According to the records, the Heilwood Red Men Lodge was no longer listed in the national directories in 1923 and appears to have been dissolved.