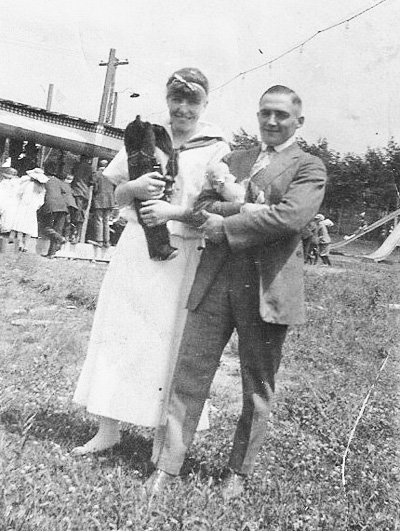 A Heilwood couple with prizes in hand. The background suggests that this photo was taken during a 4th of July celebration.

In a letter dated June 26. 1907, the mine superintendent at Heilwood, Harry P. Dowler made a request to the Freas Electric Company in Punxsutawney asking for two of their men to come down to Heilwood at once and install electric lights in the Grove. Additionally, Dowler asked if they had any light bulbs “colored red and some blue… if so, bring them along.”  All of this was in preparation for the upcoming holiday – the Fourth of July.

Throughout the years, the Fourth of July celebration in Heilwood was always something that involved the entire community and even drew people from the surrounding communities. According to the Indiana Evening Gazette, the 1913 celebration was attended by over 4,000 people.

Heilwood’s Fourth of July celebrations were always filled with a variety of events. A parade usually kicked off the day’s events. With the Penn Mary Coal Company Band in the front, various groups from the town such as the Red Men, the National Slovak Society, and the Monte Grappa Lodge, would follow. Additionally, there was often a float featuring some of the groups for young people from the town (see photos). Beginning at or near the Elementary School, the parade proceeded down the main road (Route 54) into Heilwood, and then wound its way through the various streets, culminating in the outfield grass of the baseball field located near the Grove (sometimes referred to as Heilwood Park). After the parade, baseball games (probably a double header, with one game in the morning and the other in the afternoon), a merry-go-round, games for the children with prizes, music by the local town band, and good food were available for free to all those in attendance. In addition, there might be a horse race down the main street from the Elementary School to the Mine Company Office or patriotic addresses by local politicians. Dancing took place in the Grove/Heilwood Park on several elevated dance floors, with music provided by musicians from the area.  The entire day generally culminated in a grand display of fireworks originating from the outfield grass of the baseball field.

The 1921 celebration was augmented by the Clark Brother Circus, and according to the Indiana Weekly, “A record-breaking crowd enjoyed the day in Heilwood.”

The 1923 celebration was remembered by many residents for some time. As the lid was being removed from the box of fireworks, a boy standing nearby with a lighted sparkler accidentally ignited the entire box of fireworks. No one was hurt, but a Nash car parked nearby suffered scorched and blistered paint from the intense heat!