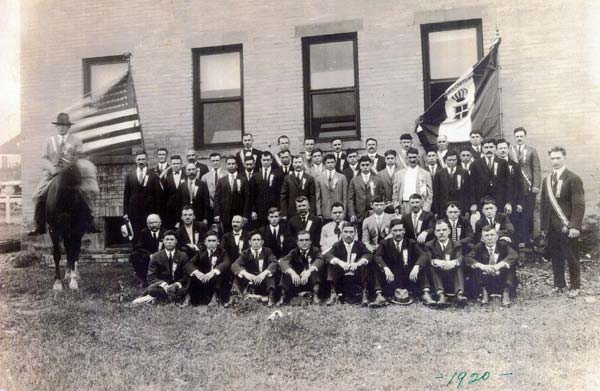 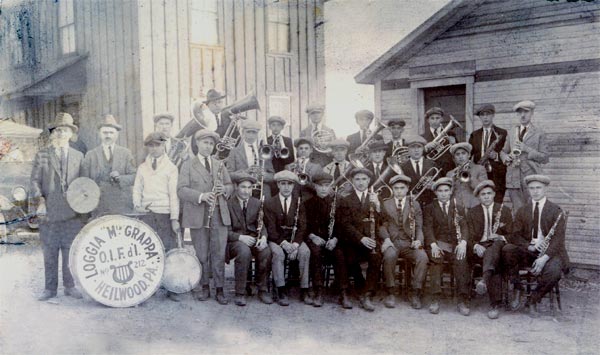 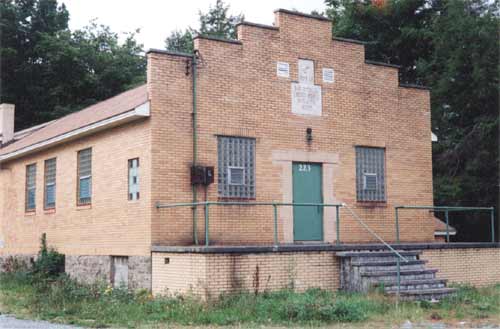 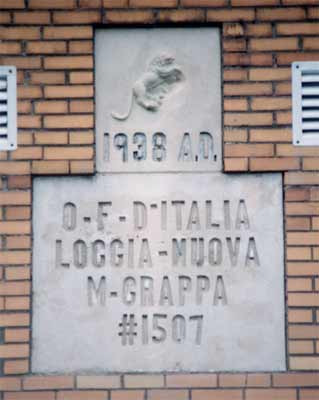 Inscription on the front of the Monte Grappa building in Colver.

Without any official local or national records to consult*, the Monte Grappa Lodge #212 of Heilwood is difficult to document. There are some newspaper and tax records that reveal its meeting place and some of its activities. However, the cause of its rise and later demise is unclear.

The lodge in Heilwood appears to have taken its name – “Monte Grappa” (Italian for Mount Grappa) – from the mountain range in the northeast region of Italy. It was customary either to name the lodge after Italian heroes or places.

With the great influx of immigrants into the United States in the early part of the 20th century, various ethnic groups formed associations so they could meet and discuss their homelands with fellow immigrants. These “voluntary” associations, in which the immigrant workers themselves set the terms of membership, became prominent in many industrial communities. Some of these groups included the National Slovak Society, the Polish National Alliance, and Monte Grappa (a group for Italians).

In addition to promoting ethnic solidarity, these associations were probably also a source of financial assistance to their members. Workers’ compensation did not come into being until 1915, so whether it was a weekly payment after being hurt on the job or a death/burial benefit, this financial assistance was important. The exact amount of dues paid by each member, in order to receive these benefits, is unknown.

According to old newspaper and tax records, the Heilwood Monte Grappa lodge held meetings in house #30 on Doctor’s Row as early as 1920. Further records indicate that in July or August of 1921, 1925, 1926, 1928, and 1932, the lodge sponsored picnics in the Heilwood Park. It appears that these picnics were open to the entire community and featured food, baseball games, dancing, amusement rides, and even fireworks. At the 1928 picnic, raffle tickets for an electric Atwater Kent radio were sold.

The 1928 closure of all mines in the immediate Heilwood area and the resulting loss of employment may have contributed to the demise of the local lodge. It’s worth noting that the records of the nearby Colver Monte Grappa lodge (see photos) show that several members of the Heilwood lodge joined that group and traveled there for meetings throughout the 1930s. There is no further mention of the Heilwood Monte Grappa lodge, either in the newspapers or tax records, after 1932. We can only assume that the lodge disbanded.

*Research done in regards to the Monte Grappa Lodge #212 in Heilwood appears to indicate that it was a member of the Order Sons of Italy in America (OSIA) but no definitive information has been located to indicate such membership.