Heilwood baseball game, circa 1920. L to R: the Catholic Church, the grandstand, “The Green” (houses), the band stand, and on the far right – Heilwood Park 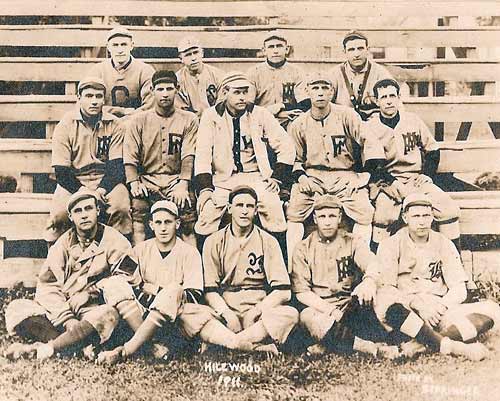 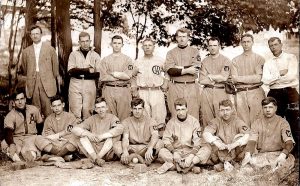 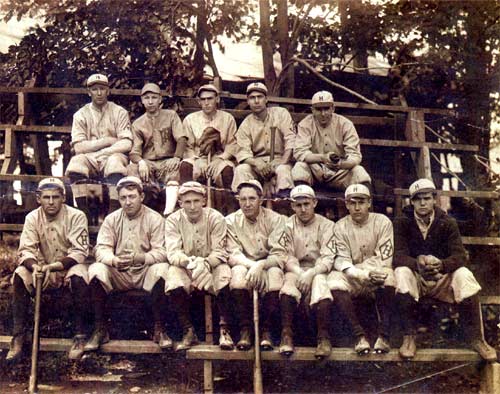 In Heilwood, as in many other mining communities, baseball was the sport of the coal miner. It gave them and their families an opportunity to escape the drudgery of the mines and everyday life, bringing the entire community – participants and casual fans alike – together for an afternoon. It also provided an important common ground between the coal company and its workers. Community pride grew as rivalries with nearby towns developed. Many coal companies even went so far as to “build” superior baseball teams by giving easier jobs to the best players, so that they could be more competitive on the field. In some cases, the coal mining companies even had a mandatory payroll deduction to support the company baseball team (see paystub examples).

Bill Forman, who appears in the center of the top photo on this page, also played baseball for the Washington Nationals of the American League from 1909-1910. He is wearing the Nationals’ home jersey in the photo – you can make out the ‘W’ for ‘Washington’ on his jersey.

In April 1911, a new baseball league was being organized among the six towns in Indiana County that could be reached by trolley or street car. Indiana, Clymer, Ernest, Blairsville, Homer City, and Blacklick were all to be members of this proposed league, but towns such as Heilwood, Dixonville, and Plumville, which had no trolley or street car connections, were eliminated from consideration because transportation to these towns was too costly and time-consuming. However, by May 17, the Indiana County Trolley League had been formed with the following teams: Blacklick; Clymer; Ernest; Indiana; Tearing Run; and Heilwood. Evidently, alternate transportation (probably by car) was arranged to bring the players to Heilwood.

The Trolley League continued in 1912, with the Heilwood team losing the championship again, this time to Indiana. In 1913, H. P. Dowler, the Superintendent at Heilwood, predicted that the town would once again have a team in the league and that they had “good materials” for a winning season. Alas, records are totally lacking for the 1913 and 1914 seasons.

By 1915, the Trolley League was gone and Heilwood joined Ernest, Lucerne, and Indiana in the newly formed Indiana County Baseball League. A newspaper article from July 18, 1915 reported that the new league “will not have paid players, those contesting being in the game for the love of the sport and not for what money they can get out of it.” Again unfortunately, there are few newspaper accounts of baseball activities in Heilwood between 1915 and 1929.

Baseball in Heilwood – another early scene 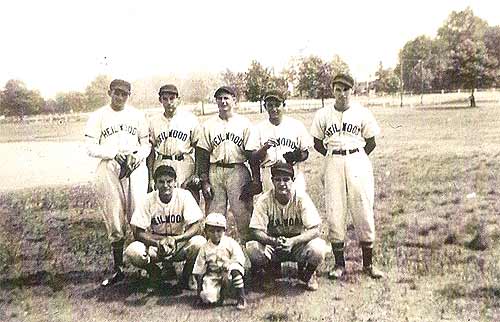 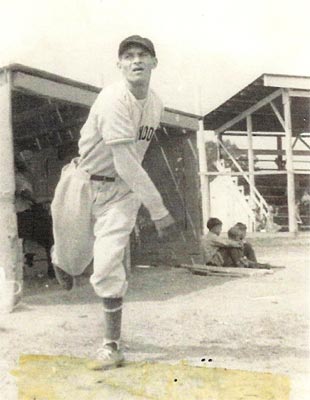 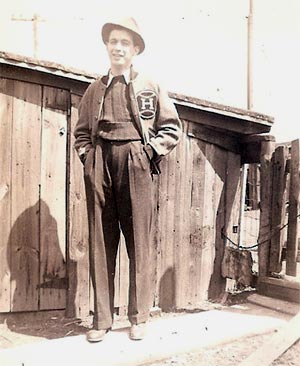 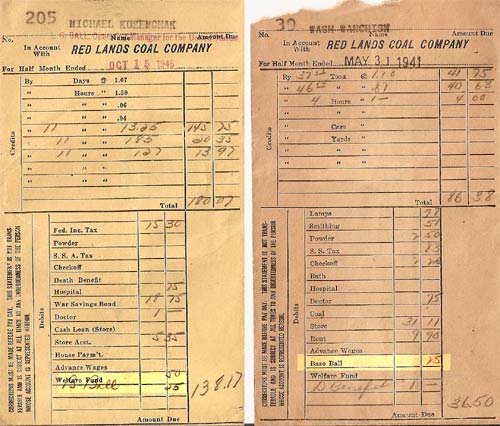 Two paystubs showing mandatory “Base Ball” deductions taken by the coal company to support the company team (highlighted towards the bottom).

The 1930 season found Heilwood still in the Indiana County League, and although they did not win the title, they were very competitive. The following lineup played for Heilwood on June 27, 1930: Lockard (P); Hill (C); Wnyda (LF); Lunn (SS); Rogers (1B); Wilson (CF); Ganoe (3B); Miller (RF); McQueeney (2B). Additional players included: Herhie; Higgins; James; Lutz; Roberts; Thorton; and Voser.

The reported lineup for Heilwood’s first game of the 1932 season was: C. Ganoe (RF); Roberts (LF); Herhei (P); Lunn (1B); Lockard (3B); E. Ganoe (SS); B. Elliott (CF); G. Ganoe (C); R. Ganoe (2B); and B. Elliott (SS). That season, Heilwood won the County League’s Northern Section with a record of 28-7, and faced Homer City (winners of the Southern Section with a record of 31-4) in what the August 10, 1932 Indiana Evening Gazette dubbed the “Little World Series.” It was a best-of-five series, with Game 1 going to Heilwood by a score of 3-2.  Heilwood forfeited the second game of the series in protest, after a crowd of spectators overflowed into the left field playing area and interfered with a hit ball. The third game of the series saw Heilwood come from behind and win 5-3. In the fourth and final game of the series, Heilwood scored a 9-5 victory and won its second consecutive Indiana County League championship. Throughout the season, pitchers C. Thorton (8-1), Lockard (6-1), Herhei (6-2), Elliott (5-1), and Judy (3-0) won a total of 28 games. Big hitting came from E. Ganoe, R. Ganoe, and particularly Gene Elliott, whose batting average was .412. E. Ganoe, Lunn, and Roberts were always threats on the basepaths. A newspaper article dated August 25, 1932 reported that Heilwood held a championship celebration attended by over 300 townspeople with “a large bonfire, wieners and things that go with them.” The fire whistle was even sounded as part of the festivities.

In 1933, the Heilwood team had to withdraw from the Indiana County League mid-season due to “labor problems in Heilwood” (a coal strike), forfeiting all of its remaining games. There’s no mention of the 1934 season in local newspapers.

Heilwood’s membership in the R&P League ended in 1937, when the team was once again forced to withdraw mid-season and forfeit their remaining games due to labor strife – another strike at the mines.

But it wasn’t until 1939 that Heilwood returned to playoff action. That season proved to be the breakout year for a hard-throwing curveball pitcher by the name of John “Hoot” Holuta, whose pitching record of 23-3 included 178 strikeouts over 134 innings (he also had a season batting average of .376) (see photo). As the Indiana County League’s North Section winner, Heilwood squared off against the South Section’s Brush Valley team in the League Championship. “Hoot” Holuta won the first game of the playoffs 5-0, striking out 11 batters. Game 2 went to Brush Valley, as Zuzula struck out 16 batters on the way to a 5-2 victory. In Game 3, Holuta was “knocked out” and Heilwood lost by a score of 11-1. Game 4 saw Brush Valley once again defeat Heilwood by a score of 18-10 to take the League Championship. Members of the Heilwood team were: D. Connerby; Corsini; F. Croyle; Duman; G. Elliott; Gaydosh; J. Holuta; B. Lingenfelter; J. Mance; Pinter; F. Salley; S. Stupic; F. Suhar; and Yaneck.

In 1940, Carl Ganoe took over management of the Heilwood team. Team members were: D. Connerby; F. Croyle; M. Gaydosh; M. Guady; J. Holuta; J. Mance; P. Reba; F. Salley; F. Stupic; J. Sutila; and Yaneck. The team finished in second place in the North Division, behind the team from Diamondville. However, “Hoot” Holuta continued his mastery on the mound with four consecutive complete games, giving up only 6 runs and 15 hits while striking out 51. Holuta’s pitching record for the season was 7-2. 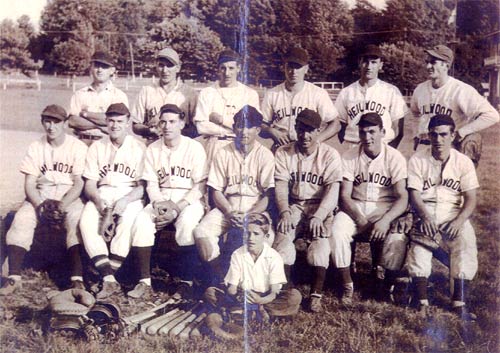 Heilwood didn’t field a team in 1942, in large part due to World War II. “Hoot” Holuta signed with the team from Mentcle and pitched in one game, winning it with a total of 16 strikeouts. However, Mentcle had to drop out of the Indiana County League shortly thereafter.

For the most part, baseball all across Indiana County went on hold while the United States fought in World War II. Many of the participants were either drafted or volunteered for duty in one of the various service branches. Some players who already worked in the coal mines were exempt from military service due to the importance of coal in the war effort. Baseball didn’t return to prominence in Indiana County until the 1946 season.

The 1946-47 seasons found Heilwood still fielding competitive teams, but there was no league championship or playoffs. “Hoot” Holuta continued his pitching wizardry on the way to a 9-2 record. Frank Klosz, the Heilwood manager during these years, had a novel way of drying the infield in preparation for games following a rainstorm. Klosz had a 55 gallon barrel fitted with drains and specially designed to fit in the trunk of his car. As he drove the car around the infield, the barrel would soak the field with gasoline. Klosz would then set fire to the entire infield, quickly drying it out and making it playable for that day’s game. A former Heilwood resident said that if you were in the outfield when the infield was ignited, the town became invisible behind the black cloud created by the burning gasoline! 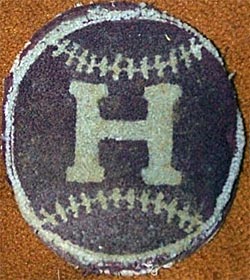 In 1948, the Heilwood team made a big move in order to try and become champions of the R&P League. The coal company, along with the team manager, Frank Klosz, sought out and hired two significant players for the team that season: Joe “Iron Horse” Yosurack and Alonzo Hicks*. Along with these two new players, the Heilwood team included the following: Dick Berringer; Carlo Chiappeli; Dwight Connerby; Geno Corsini; F. Croyle; Mike Guady; John Holuta; Henry Leis; Joe Lesky; John Patrick; Joe Pino; Patsy Reba; Aldo Rossi; Flory Stupic; and John Wilson (see photo). Heilwood won the first half of the season and faced the second half winner, Waterman, in a seven-game championship series. Waterman won the championship, but “Hoot” Holuta was named the Most Valuable Player for the R&P League with a 19-5 pitching record and 149 strikeouts.

The 1949 season ended early for the Heilwood team, which had to withdraw from the R&P League after playing for a little more than a month due to a lack of players.

In 1950, Heilwood didn’t field a team, forcing many of their players, including “Hoot” Holuta (Waterman), to play baseball elsewhere. Baseball had become a thing of the past. Mechanization and the slowing demand for coal made employment in the Heilwood mines drop dramatically, and many former (or potential future) players left the community for employment opportunities in cities such as Detroit and Cleveland.

The baseball teams that represented Heilwood and its surrounding communities played baseball at a level that was as good or better than many of the semi-pro or amateur baseball leagues that existed in the United States during the 1930s and 1940s.

Two individuals from Heilwood went on to make their marks on a professional level. Al Porto, born in Heilwood in 1926, played for the Philadelphia Phillies in 1948. He was a left-handed pitcher, but only faced 15 batters in the majors. August Joseph Donatelli, better known as “Augie” Donatelli, was born in Heilwood in 1914 and went on to become a National League umpire for 24 years. He was on the first cover of Sports Illustrated in August, 1954.

*Alonzo Hicks was probably the first and only African-American to play for Heilwood.

One thought on “Men’s Baseball”