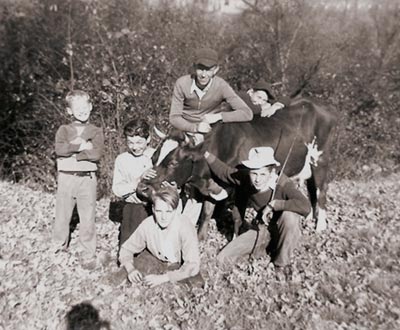 By 1940, it was still common practice for Heilwood families to keep cows, and many of the town’s teenage boys spent their summers as “cow punchers” (see photo) – herding groups of cows along while they grazed the grassy areas just outside of town.

The town had two separate “free grazing” areas – places where the cows were allowed to roam freely instead of being fenced in or restrained by a tether/picket. Cows belonging to families on the northern end of town (Pine Street area) grazed in a different area than those belonging to families on the southern end of town (Doctor’s Row/Chestnut Street area). While the families living along the edges of town – Pine Street, the lower side of Third Street, and Doctor’s Row – were permitted to raise animals in their yards, a coal company regulation prevented the families living on the interior streets (First and Second Street) from doing so, so many of these families had barns or pens built below Third Street.

Cow punching on the north side of town went something like this. After the cows were milked in the morning, they were led from their barns up through town by the mothers. With their bells klunking, they headed towards Sunnyside. The houses that used to stand in that part of town were long gone by this time – only the foundations remained – but there was a good supply of grass on which to pasture. This was the starting point for the day. The mothers returned home to get the boys out of bed, fed, and headed towards Sunnyside. The cows, under the watchful eyes of the boys, worked their way around Sunnyside, behind the Big House and the Hospital. Around lunchtime, the boys divided ranks and took turns while half went home for lunch and the other half watched the cows. Eventually, the cows wound up near the long-vacant Dairy Barn and Bellando’s farm. From there, the boys would lead them across the road near Jusko’s store, sometimes holding up traffic. Then the cows pastured along Soldier’s Field and across The Green, winding up back in the Pine Street area and the barns. This was the daily routine for the summer.

Southern Heilwood free grazing (for families living in the Doctor’s Row area) followed a different route. In the early mornings, the cows were led from their barns to an area directly below Doctor’s Row to graze from “the pines” to below Third Street. Around noon, the cows were directed by the boys down the hill and across the railroad tracks to areas where there was plenty of grass and water for the afternoon. Around 4:30 pm, the boys drove the cows back up the hill, and into the barns for that evening’s milking. After being milked, the cows stayed in the barns until the next morning. 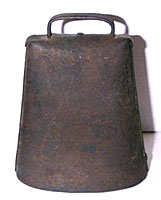 Although the boys on either side of town spent their days in different areas, they shared many of the same experiences while tending the cows.

When the boys left home in the morning to start their daily routine, they often took their baseball gloves, bats, and balls along. Although their primary responsibility was to carefully watch the cows, the boys sometimes became distracted by a friendly game of baseball, various games played with their pocket knives, or even a swim in the nearby creek. The nearby woods provided nuts and berries for the boys to eat. The woods also provided “grape vines” for the boys to swing on, sometimes from vine to vine, pretending to be Tarzan. Another distraction could be found atop the lumber pile by the old Sunnyside jail, where you’d often see shirtless boys playing penny ante or “matchie” poker.

Occasionally, these distractions resulted in the cows, even with their clanking cowbells, to wander too far in the wrong direction – both out of sight and hearing distance – and this could lead to serious consequences. One time on the north side, the boys suddenly realized they couldn’t see or hear the cows, so they quickly stopped their games and began to search for them. Soon they found out that the cows had wandered up to the Jewtown area. An enterprising resident had gathered up the cows and was holding them for ransom! The boys had to go home and explain to their parents that not only did the cows get away, but that in order to get them back, the parents had to pay a $5-per-cow ransom. Needless to say, the parents were none too pleased. After the parents got the cows back, the boys were in for some discipline – probably in the form of a “licking”!

One boy who tended the family cow often took a two-stringed guitar along, which had been given to him by his older brother. He liked to lie under a tree and strum and sing the country classic “Old Shep”, a popular song written in the 1930s. That same summer, a friend of the boy gave him the nickname “Shep” – and that nickname has stuck with him to this day.

Over time, the families living in the Doctor’s Row area began to use a different grazing method. Every morning, the boys put the cows on long chains and picketed them to an area of the hillside below Doctor’s Row. Around noon, the cows were taken to a watering area made from a 50-gallon drum being fed by a spring further up the hill. Afterwards, the cows were led to another location and picketed to pasture for the balance of the day before heading back to the barns for milking and bedtime.

Sometimes the cows broke loose from their pickets and wandered off, leading to a frantic search. One of the boys said that if there was a train at the railroad station, the engineer would sometimes let the boys climb aboard and they would drive up and down the tracks looking for the lost cows.

Many of the families that owned cows had pet names for their animals. Some of the names remembered by older residents of Heilwood include: Rosy, Helen, Star, Nellie, Red, Daisy, and Betsy.

Sometimes when a family needed a calf, a specific cow was taken by the boys to the Krevel’s, Beilchick’s, or Novak’s farm… to visit the bull!

Along with cow punching, the boys had another responsibility during the summer – gathering hay from the local hillside for the coming winter’s feed. One method of making hay involved fencing in a particular area all summer long, allowing the grass to grow to maximum height. The men would then cut this grass with scythes and allow it to dry. After it was dry, the boys would load it onto a carrier made from several burlap sacks sewn together and drag it to the barn. While unloading it into the barn, the boys jumped on the hay to pack it down so they could fit in as much as possible for the winter.

Grass growing on any or all parts of the hillside was also collected by cutting it down with a scythe, drying it in place, and then gathering it up on blankets and taking it to the barns for the winter. It was usually stored in a loft area and augmented any “bought” hay stored in the main part of the barn.

As this final generation of cow punchers graduated from high school, got married, and maybe moved away from the area seeking work, the Heilwood families gradually stopped keeping cows. The days of the Heilwood cow puncher were soon gone.