The Home Harry Dowler Had Built, circa 1910 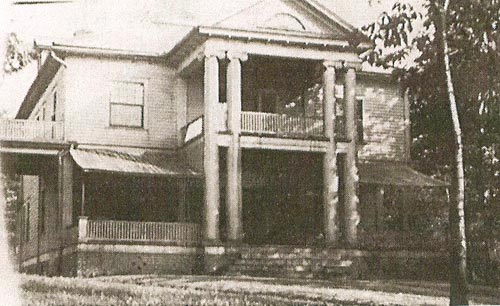 The Big House, circa 1916. Notice the addition of two canvas awnings on either side of the main entrance.

The original mine superintendent’s house was among a group of offical’s homes at the base of 1st Avenue, along Route 54. This home might also have been John Heisley Weaver’s summer home.

Harry Dowler, superintendent for the Penn Mary Coal Company, lived in this home for several years. Early in 1907, he had Frank M. Moore, civil engineer and architect from Indiana, Pennsylvania, draw up a set of plans for a new residence. It was to be located on a “prominent rise” that overlooked the town of Heilwood.

The Hyde Murphy Company of Ridgway, Pennsylvania, was initially contacted to build the home. However, they turned down the opportunity, stating that, “We do not feel justified sending an expert superintendent there to look after just one building.”

Not to be deterred, Dowler continued to fine-tune his plans, weighing the cost of a wood vs. brick exterior, plus other modifications. A year passed. For some unknown reason, the Hyde Murphy Company then changed its mind and agreed to build the home.

In the Fall of 1908, construction began under the supervision of William London, supervisor for the Hyde Murphy Company. The materials for the home were specified to be only #1 oak and hemlock, free from shakes or rot. The home would be a grand residence!

Rumored to cost $10,000, it would be a two-story building in a Neo Classical style (identifiable by its facade, which was dominated by a full-height porch with a roof supported by classical Corinthian columns). It would also have a symmetrically balanced center door with decorative surroundings. In all, there were to be 13 rooms, two baths, hardwood floors, electric lights, central heating, and a stone fireplace in the living room.

Work continued through the fall with Mr. Dowler making changes in the second floor plans. By April of 1909, the home was ready for occupancy. To further describe the interior of the home, The Indiana Evening Gazette, in an article dated December 29, 1910, describes the den:

An apartment unusual in its conception and artistic in every feature. The den has a wainscoting of hemlock back, above which is a wild grape vine railing. Above this, the walls are covered with white birch bark and the beams are of the same material. At one end, near a stone fireplace and manel, is a representation in stone, glass, and running water of a flowing spring. At the other end of the room life-size likenesses of two lions and a tiger scowl at one from cunningly devised lairs of wood and stones, electricity playing no little part in creating the delusion. The apartment is furnished with divans and easy chairs, while from the ceiling and walls are suspended trophies of the chase and sportsmen’s articles such as delight the hearts of men.

On September 3, 1914 at 5:30 p.m., after Mr. Dowler had moved his possessions from the home, a fire was discovered on the front porch. The floor had been covered with burlap, excelcior, and straw to a depth of three -to-four inches and set ablaze. The fire was quickly put out by some passing workmen but not before it had damaged some of the flooring and support columns. An additional fire was reported shortly after this one, in the same area, but the person/persons responsible were never apprehended.