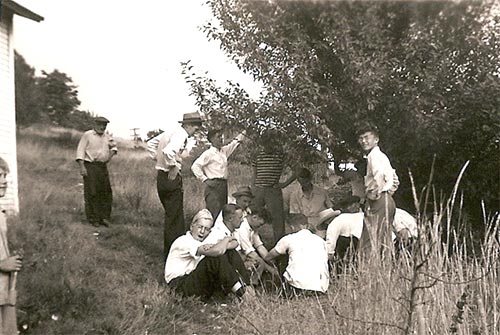 Photo of a poker game (dated August 22, 1943), probably behind the Heilwood Barber Shop.

The life of a coal miner was difficult at best, but many miners sought and found some diversion in games of chance, such as poker. Poker has been entertaining people for centuries, but it’s also a game that can easily get out of hand, and it undoubtedly wound up taking the complete pay envelopes of unlucky Heilwood miners from time to time.

The game of “penny ante” evolved as a way to lessen a player’s potential losses. The name of the game itself explains the basic idea – no large sums of money were involved, and table limits and rules were established at the outset of each game.

Pennies were originally used, as the name implies. However, possibly due to economics, marbles and even dried pasta were sometimes substituted. “Matchy poker” (or “match stick poker”) games utilized the large, wooden matches found in nearly every household. The large cardboard boxes of matches could be purchased for less than ten cents and afforded the player quite a bankroll. This particular variation was appealing to the youth of Heilwood, who didn’t have their own money to wager.

Heilwood was the scene of many penny ante games and probably many larger stakes contests, as well. Various locations around town became popular poker spots, including beside the coal company office, behind the school auditorium, near the Presbyterian Church, as well as many undisclosed locations. Most of these locations were outside under large trees, which afforded the players shade from the sun. In some cases these games continued well into the evening, under lights held aloft by local youths, which allowed the players to see their cards and money. Some of these youths might also be asked to run to the company store for sodas or candy for the players. These youths would then be compensated with some amount of “drag” (money) from each pot or hand.

The exact financial loss or gain of the participants at these games will never be known, but for those brief hours the players were able to escape the toil of the mines and relax with fellow workers.