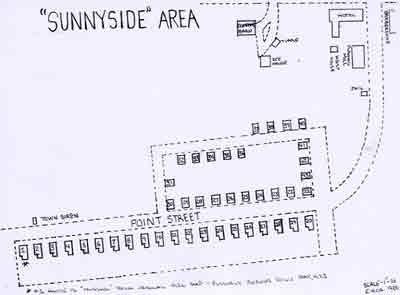 Map of the Sunnyside area (circa 1926) – click to enlarge 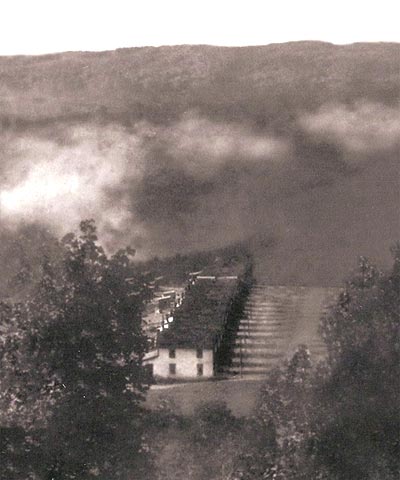 View of some houses on the south side of Point Street (south side) in Sunnyside, circa 1911. 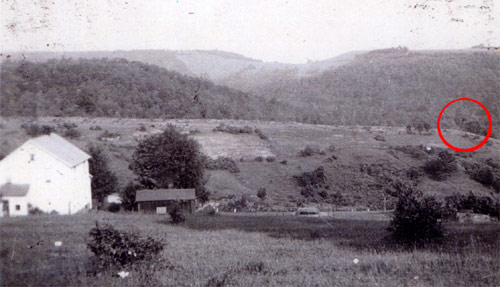 View of the Sunnyside area from First Street, ca. 1941. By this time, all of the houses had been demolished, but you can still see the fire whistle (in red circle).

A short distance from the center of Heilwood, a group of homes were built to house additional workers for the mines. From early pictures of Heilwood, it’s apparent that construction took place prior to 1908. The area came to be called “Sunnyside” – although the origin of the name is unknown.

Housing in Sunnyside was arranged along rectangular lines of survey and consisted of four- or five-room houses. Utilizing a 1926 map, we can see that there were approximately 45 houses. The only street that had a name was Point Street, and it consisted of 20 houses on the southern side and 10 on the northern side. Each home had water and electricity. Outhouses and coal houses were found at the back of the lots (see map).

Sunnyside remained a viable housing area into the mid-1930s. Facing economic hardships, little work, and miners leaving the area, the coal company found it necessary to consolidate the housing of the miners. Workers were moved from Sunnyside to the central part of Heilwood, and the former Sunnyside residents were “assigned” new homes by the company – there was no choosing of home sites.

In time, these abandoned homes were sold for lumber by the coal company to individuals who could come up with the money, or used for repairs. Once the buildings were removed, many of the stone foundations were utilized by the Catholic Church in 1937 to build a stone building (replacing the wooden-frame church that had perished in a 1934 fire). The Sunnyside area was then used by Heilwood residents for gardens, livestock pastures, and berry-picking.

People who were raised on Sunnyside tell stories of being considered “outsiders” by some residents of Heilwood and relegated to only playing with other children from Sunnyside. This isolation was epitomized by a baseball team that the youth assembled – the Sunnyside Sluggers!