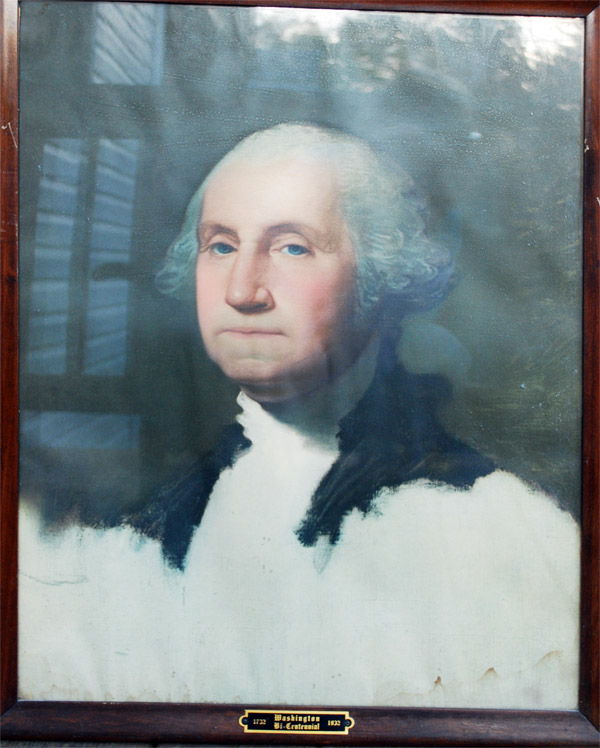 Portrait of George Washington that hung in a Heilwood school classroom, circa 1931. 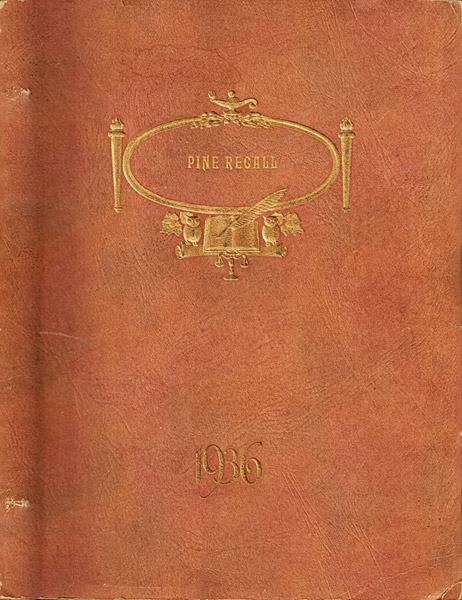 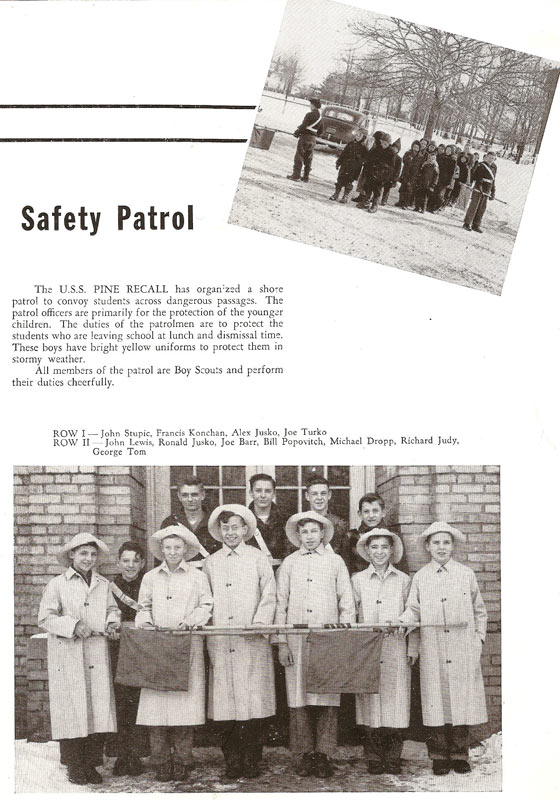 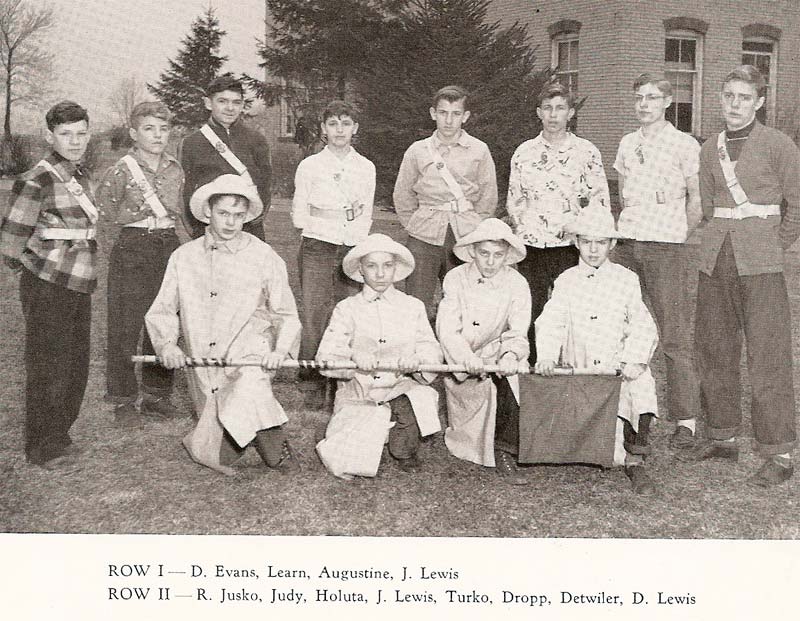 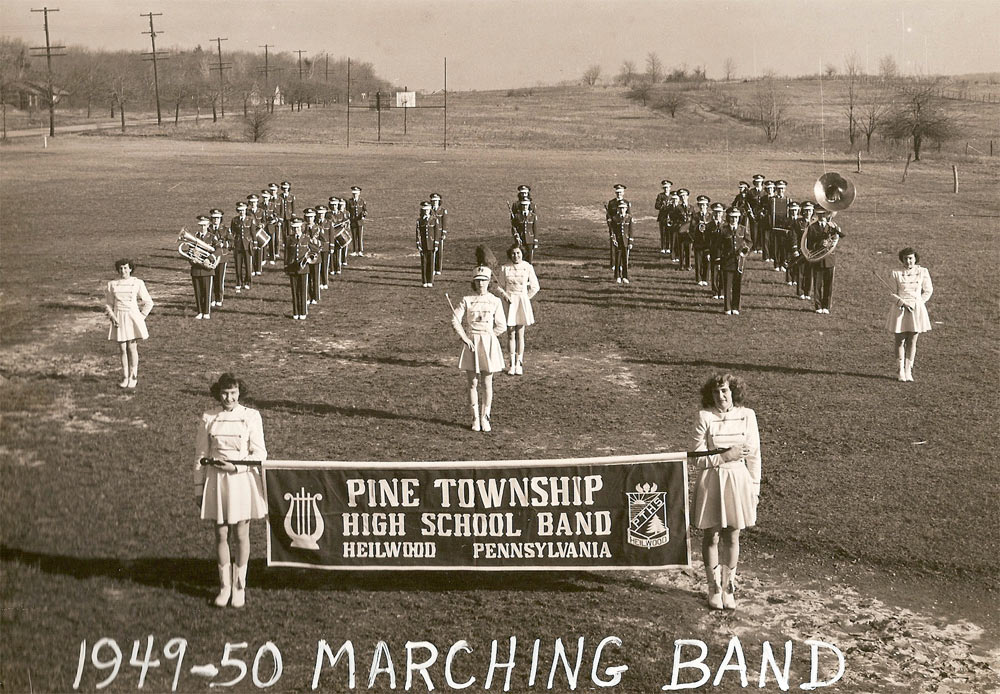 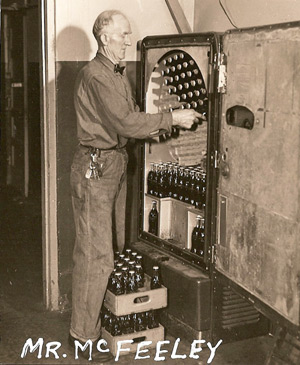 Following the initial construction in 1926-27, few if any exterior changes were ever made to the high school building. And with six large classrooms, an auditorium and several smaller rooms, the interior was only changed slightly over the years. In August 1949, Raymond Lockard’s room was relocated from the basement to the auditorium on the first floor. This relocation necessitated the placing of a steel beam under the floor, upon which a permanent wall was built to replace folding doors that had been installed in 1932 between the two classrooms. Also at this time, the library was moved to the second floor, adjacent to the central supply area.

In December 1931, the School Board authorized Mr. Ray Laing to frame and hang a picture of George Washington in each classroom at a cost not to exceed $1.84 per picture (see photo).

Extracurricular activities also became important to the students at PTHS. The Pine Echo (the school newspaper) made its first appearance in 1933 and the Pine Recall (the school yearbook) was first published in 1936 (see photo). Various clubs also became part of the school experience. A Design Club, Music Club, Dramatic Club, and Chemistry Club were introduced in 1934. A Press Club was added in 1937 and it was responsible for the publishing of the Pine Echo. In addition, the Dance Club, Etiquette Club, Athletic Clubs, and Business Club made their first appearance in 1937. A Folk Dancing Club was added in 1938. In the following years, additional clubs made an appearance, including: Nature Club (1939); Latin Club (1940); Art Craft Club (1940); Engineering Club (1940); Social Dancing/Tap Dancing (1940); Student Council (1942); Archery Club (1943); 4-H Club (1943); Heilwood Auxiliary Club (1943); and Camera Club (1948).

Label for Buckshaw’s Potato Chips, which were commonly sold to Heilwood schoolchildren in the early 1940s.

Another organization founded in 1936 was the Safety Patrol. It was the responsibility of its members to help protect students crossing the highway, who were leaving the school at lunchtime and dismissal time. Members of the first Safety Patrol were: James Lidwell; Ledo Corsini; George Terko; Joe Rusnak; Pete Mekulsia; Lois Henry; Charles Bertison; and Mike Yopchick. In succeeding years, many members of the Safety Patrol, sometimes called the Boy Patrol*, were members of the Boy Scout Troop in Heilwood (see photos).

With the addition of the Music Department in 1934, a school orchestra was added in 1936. It consisted of violins, trumpets, saxophones, a trombone, and drums. By 1939, under the direction of Paul Campbell, the membership had grown to 19 members (see photos). Additionally, many students from the school were selected to participate in the All-County Music Festivals as members of either the chorus or the All-County Band or Orchestra. In 1943, the 7th and 8th grade students were introduced to the melody flute, whereby future band members could be developed. In 1947, PTHS was represented for the first time in the Central Western District Orchestra by Mary Salley on the violin.

By 1949, the school band had grown from its initial 15-piece organization to a 45-piece band under the leadership of Anthony Cotroneo. When asked how he managed to increase the size of the band so dramatically, Mr. Cotroneo said, “You must sell music to people, and apparently I found many interested buyers here at Pine Township….”  Also in 1949, with help from the Board of Education and the Band Mothers Club, 40 new uniforms were purchased for the band. The next year, 45 white belts were purchased for members of the band from Gimbel’s Store in Pittsburgh. Majorette uniforms were made in the Home Economics Department under the supervision of Mary Jane Holben (see photo).

During the World War II years of 1941 to 1945, PTHS students took part in many of the war effort activities that were being conducted locally and across the nation. They sold stamps, war bonds, and ran scrap/paper drives. Many students and teachers were either called to active duty or volunteered to serve their country (see photos)**.

On October 5, 1942, the School Board adopted a new policy that reflected the general sense of patriotism at the time. The School Board stated that: “It shall be the requirement of every pupil attending the public schools of Pine Township to make a salute to the flag of our country, the United States of America.” As a part of the war effort, a Pre-Flight Aviation class was introduced to the curriculum in 1943. The students learned about the history of aviation, civil air regulations, aerodynamics, meteorology, navigation, and communications. Finally, as a direct result of the war effort, a paper shortage caused the Pine Recall to not be published in 1944.

A number of other activities took place at Pine Township High School. Class and school plays, along with candy sales, were used as fundraisers for different groups within the school. Field trips to visit area businesses and sites of interest also became a part of school activities. Although not an official ‘activity’ per se, daily visits to the Coca Cola machine in the basement became something that most students in the high school participated in at some point (see photo).

*The 1936 Safety Patrol was the only year that a female was a member of the organization.

**There were four individuals from the Heilwood area who made the ultimate sacrifice while serving their country during World War II.