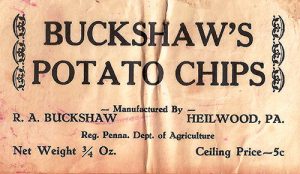 Label for Buckshaw’s Potato Chips, which were commonly sold to Heilwood schoolchildren in the early 1940s. 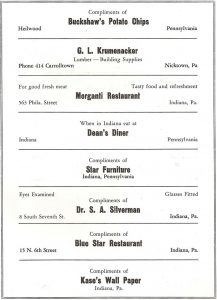 Many Heilwood schoolchildren in the 1940s enjoyed the unique lunchtime experience of buying freshly made potato chips in waxed paper bags from the Robert Buckshaw family, who lived directly across from the elementary school.

The process to make the potato chips was rather simple. The potatoes were hand-scrubbed, peeled, and then sliced – one potato at a time – on a hand-powered mechanical slicer.* Once sliced, the chips were placed into a large mesh basket and immersed in a metal kettle filled with oil heated by bottled gas. After cooking, the basket was removed from the kettle and the chips dumped onto a wire rack to dry (also, to enable the excess cooking oil to drain back into the kettle).**

Once dried, the chips were placed into waxed paper bags, which were weighed on a scale so that each sealed, five-cent bag held 3/4 of an ounce.  At the conclusion of each day, the Buckshaws would take the oil from the kettle and strain it through a fine mesh screen to eliminate any contaminates. This entire operation was conducted within the confines of a small, wooden framed building – no larger than 10’ x 12’ – in the right rear corner of the Buckshaw property.

According to interviews with long-time Heilwood residents, the chips were sold at lunchtime to schoolchildren during the week and were also available in the evenings to customers who stopped by the house. The chips were also sold at high school basketball games, the company store, and given out on Halloween night to trick-or-treaters who visited the Buckshaw house.

In addition to local distribution, Buckshaw would load up his 1941 Nash automobile several times a week with multiple boxes of potato chips and make deliveries to area stores in Alverda, Nicktown, Spangler, and Strongstown. On occasion, Buckshaw was assisted in his deliveries by a Heilwood youth.

Memories vary on whether there were bags larger than the five-cent size – there may have also been bags ranging in size and price up to 25 cents!

*At times, Heilwood-area youths would volunteer to assist in the potato chip making process, undoubtedly hoping to receive some of the chips as payment.**The potato chips were probably deep-fried in lard, which would account for several interviewees stating that; “the chips tasted great but they were a little greasy”.