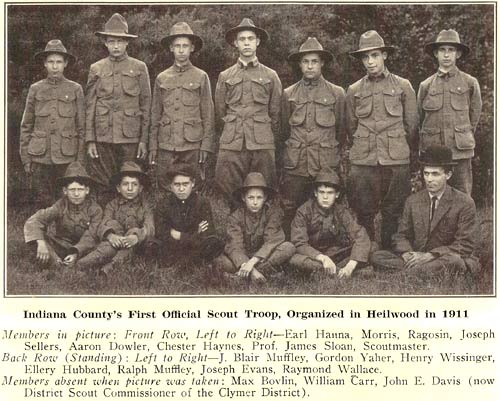 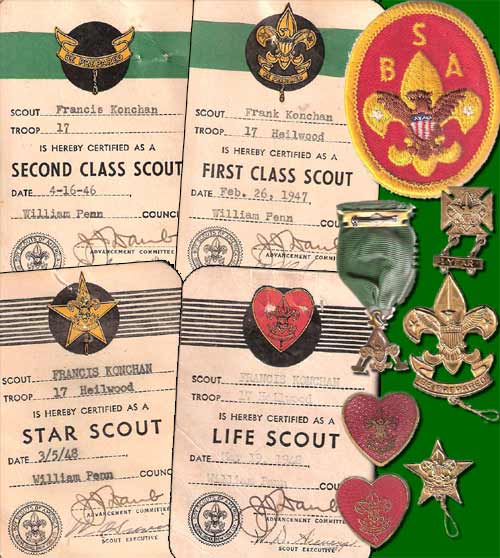 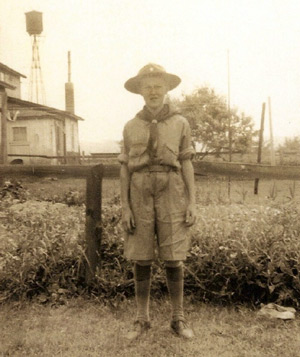 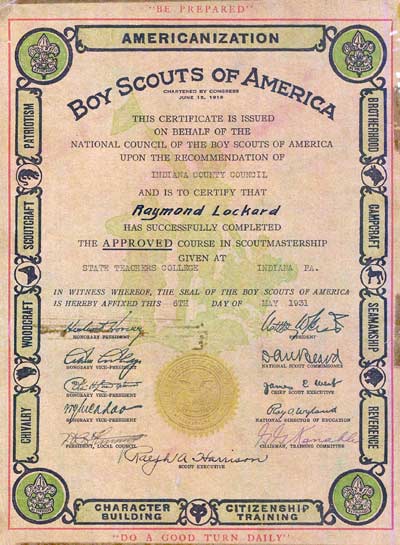 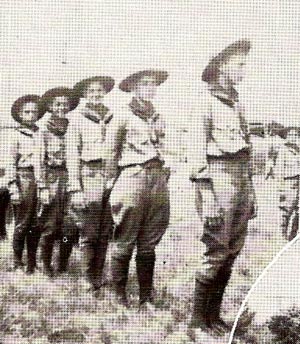 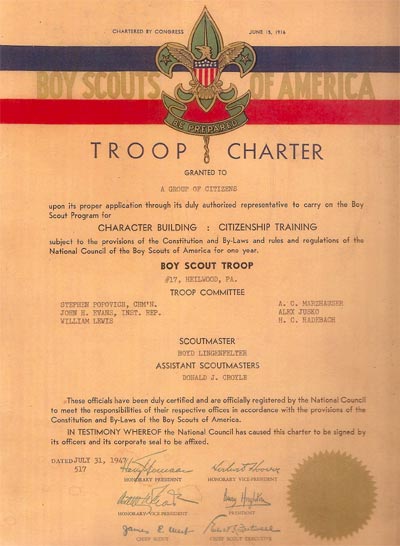 Troop charter issued in 1947 by the Boy Scouts of America to "a group of citizens" in Heilwood.

In August 1907, Lord Robert Baden-Powell formed the first Boy Scout troop in England. Scouting came to the United States when the Boy Scouts of America were incorporated under laws of the District of Columbia on February 8, 1910.

1942 Boy Scouts of America manual, used in Heilwood into the late '40s

This troop is believed to be the oldest in what is now the Penns Woods Council, which includes all of Indiana, Cambria, Somerset, Blair, and Bedford counties, as well as parts of Armstrong, Westmoreland, and Huntington counties.

Any activities of the Heilwood troop from 1911 until 1923 cannot be located. However, starting in 1924, the troop participated in the following reported activities: camping at Camp William Penn near Cherry Tree (1924); traveling to Pittsburgh to visit the Carnegie Museum, the Heinz Plant, and watching a Pittsburgh Pirates baseball game (1927); participating in the Annual Bird House Building Contest (1928), after which the winners traveled to Harrisburg and Gettysburg. In October 1928, the largest and best-attended scouting activity in Heilwood was the presentation of the Eagle Scout Badge to Carl Babiak, the first Scout to obtain such distinction in the Heilwood troop as well as Pine Township.

Program from the 1930 Boy Scouts of America Merit Badge Exposition

While participating in the above activities, several members of the Heilwood troop distinguished themselves by winning various awards. In the 1928 Bird House Contest Frank Suhar took 3rd place and Octavius Cicero took 4th place in the Tender Foot Division, and Steve Stupic took 4th place in the 2nd Class Scout Division.

Members of the community as well as coal company officials took an active interest in the troop by serving in different capacities through the years. Robert Laing, George Lindsay, J. R. Duncan, Dr. Lyons, W. A. Dinsmore, George Fields, Howard Kuhns, E. J. Barber, Reverend C. Leroy DePrefontaine, Steve Popovich, Boyd Lingenfelter, Carl Babiak, and Don Croyle are some of the individuals who provided service and support to the troop.

Not only did the scouts in Heilwood and surrounding towns receive support from their communities, they also received support from the Indiana State Teachers College. ISTC conducting Leadership Training Courses in the summer, and offered leaders from the various county scout troops the opportunity to complete an approved course in Scoutmastership, sponsored by the National Council of the Boy Scouts of America. Lisle Learn, Reverend C. Leroy DePrefontaine, J. R. Duncan, and Raymond Lockard, all from Heilwood, were some of the individuals who participated in the Leadership Training Courses (see certificate).

Heilwood Map (circa 1919) showing location of a Boy Scout Camp.

Two meeting places for the Heilwood troop reportedly were the Scout Room in the high school and the community club rooms located on the second floor of the company store. Also, a map of Heilwood from circa 1919 (see below) shows a “Boy Scout Camp” in an easterly direction behind Staff Street. The camp is situated in a direct line with the elementary school and the former teacher’s dormitory building.

Each year, the Executive Board of the BSA required the Heilwood troop to renew its unit charter. In 1947, the charter for renewal was issued to “a group of citizens” from the town (see document), whereby they pledged to provide adequate facilities, supervision, and leadership for a period of at least one year and to make an effort to provide members with a quality program experience. 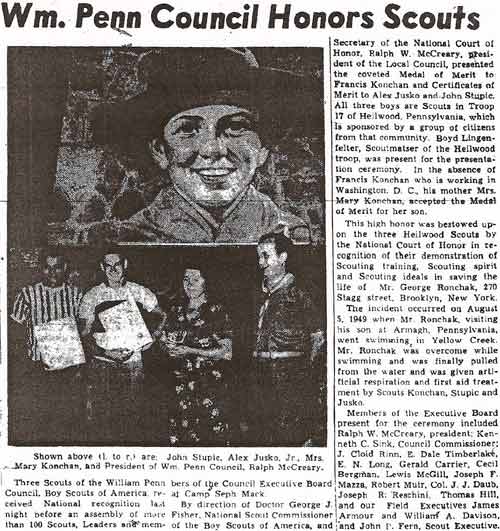 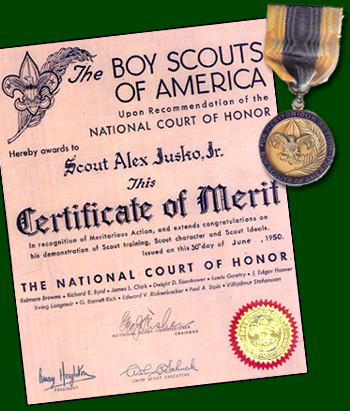 On July 18, 1950, three members of Heilwood Troop #17 were recognized for saving the life of George Ronchak of Brooklyn, New York, who was overcome while swimming in Yellow Creek in August 1949. After pulling him from the water, Boy Scouts Francis Konchan, Alex Jusko Jr., and John Stupic administered artificial respiration and first aid treatment (see newspaper account). Francis Konchan was awarded the Metal of Merit and Certificates of Merit were given to Alex Jusko Jr. and John Stupic (see photo).