A panoramic view of a Heilwood FIrst Aid Meet, circa 1922 (click to enlarge).

THE CREATION OF MINE RESCUE TEAMS 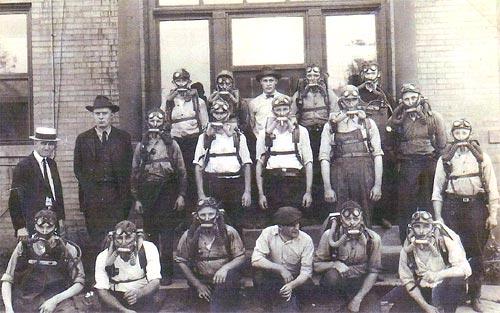 By the late 1800s, the history of anthracite coal mining in Pennsylvania was already marked by an alarming increase in the number of fatalities each year. In 1869, 108 men and boys (along with two rescuers) were killed at the Avondale Mine in Plymouth, Luzerne County, when a surface fire blocked the exit from the mine. The following year, there were 211 fatalities. By 1896, the number of fatalities each year had grown to over 500! As a result of these figures, the first formal mine rescue teams were organized and trained in 1900.

The bituminous coal regions of Pennsylvania shared a similar history. In 1904, 536 miners were fatally injured. In December of 1907, two explosions and roof collapses – one at Monongah, West Virginia and the other at Van Meter, Westmoreland County, Pennsylvania – claimed 601 lives. An additional 205 fatalities occured in other Pennsylvania bituminous regions that year, bringing the years’ total to 806 miners – the deadliest year in Pennsylvania (and United States) mining history. Following the anthracite regions’ lead, the bituminous regions established and trained their first formal mine rescue teams in 1908. 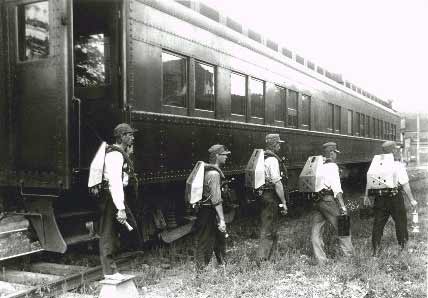 Bureau of Mines rescue car and crew (photo courtesy of Mine Safety & Health Administration at www.msha.gov/MineRescue/EARLY.htm). 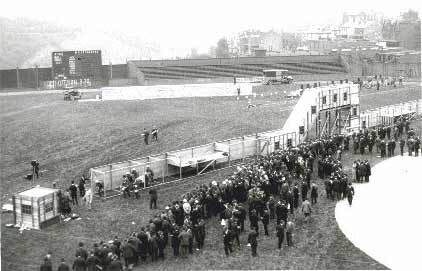 First national mine safety demonstration at Forbes Field in Pittsburgh (photo courtesy of Mine Safety & Health Administration at www.msha.gov/MineRescue/EARLY.htm). 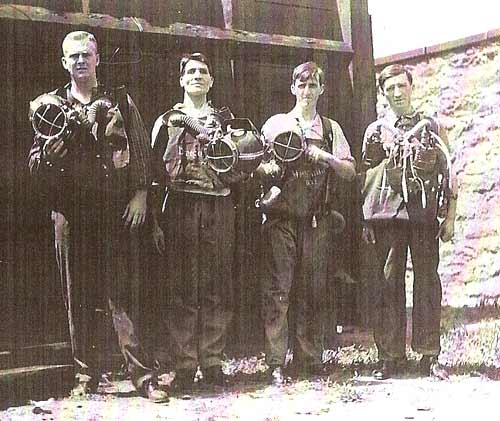 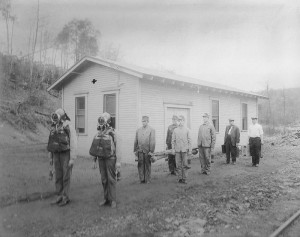 THE U.S. BUREAU OF MINES

In 1910, the United States Bureau of Mines was established by an act of Congress. Soon afterwards, the Bureau undertook a program of obtaining railroad passenger cars and modifying them into mobile stations for mine rescue and first aid training (see photo). Equipped with breathing apparatuses and carrying a crew of six men, each trained for a specific duty in regards to mine rescue and first aid (along with a steward/chef), the cars travelled to mine disasters to determine their causes and also to instruct the mines within their regions on procedures for administering first aid to mine accident victims (see training certificate below right). Additionally, they were to organize annual first-aid and mine rescue contests throughout their districts. There were four major stations established across the bituminous and anthracite coal fields, along with eight mine rescue cars. With these mine safety cars in operation throughout the coal fields, many mine operators, who previously had no safety training for their employees whatsoever, began to establish their own company programs. 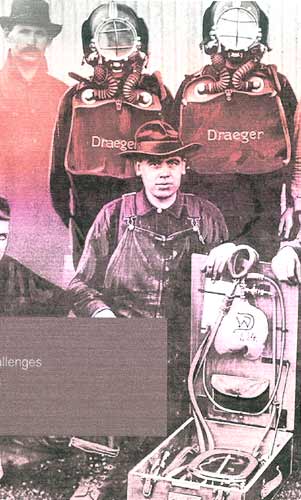 A closer look at the Draeger breathing apparatus

In October 1911, the first national mine safety demonstration was held at Forbes Field in Pittsburgh (see photo). The demonstration illustrated all of the branches of the United States Bureau of Mines investigative work in relation to mine accidents, including first aid and mine rescue work. In addition, there were demonstrations of coal dust explosions at the Bureau’s experimental mine at Bruceton, Pennsylvania. Approximately 15,000 people attended the demonstrations, including President William H. Taft. Also attending were Heilwood’s mine superintendent Harry P. Dowler and Company Surgeon Dr. R. F. McHenry.

Dowler was so impressed by the demonstrations in Pittsburgh that upon his return to Heilwood, he immediately began the construction of two mine rescue buildings, one at the #1 Tipple and the other at the #2 Tipple. The buildings were equipped with two Draeger helmets with a two-hour capacity, and one similar unit with a one half-hour capacity (see photo). Each building was also equipped with a pulmotor for artificial respiration. Additionally, Dowler began a program to provide first-aid training to teams of miners. 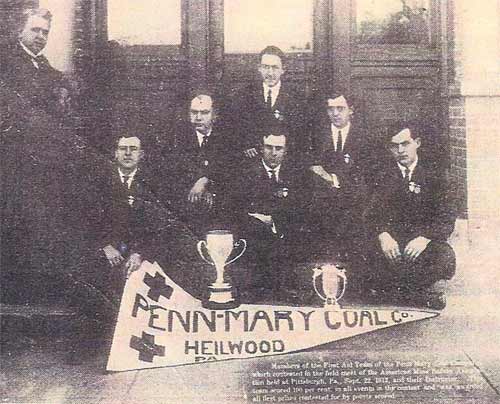 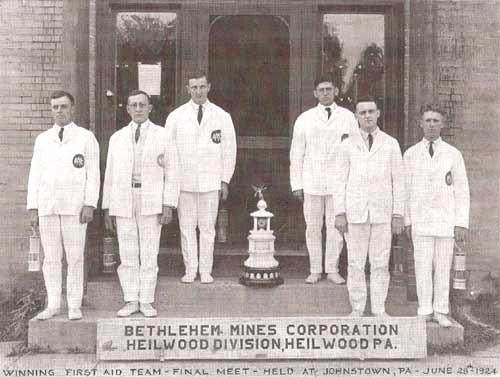 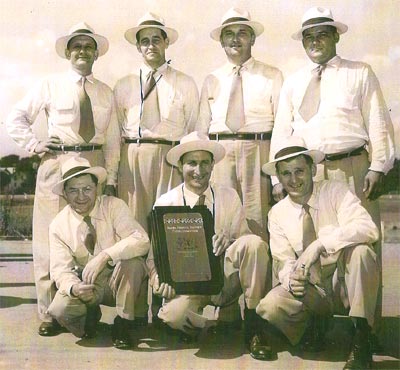 In 1913, the training program in Heilwood was spotlighted when the Penn Mary Coal Company team took first place in the American Mine Association meet held in Pittsburgh, achieving a perfect 100% score (see photo). That same year, the team also traveled to Terre Haute, Indiana to participate in the United States Bureau of Mines safety meet. Competing against over 30 teams from all across the United States, the Penn Mary team captured the First Grand Prize for excelling in methods of resuscitation. In addition, they were awarded the Second Grand Prize based on their overall team average. The following year, the Penn Mary team once again captured the First Grand Prize for resuscitation and since they won in two successive years, the Grand Prize Cup was to permanently remain with the team.

A Heilwood-based first aid team from the 1940s, in matching uniforms. 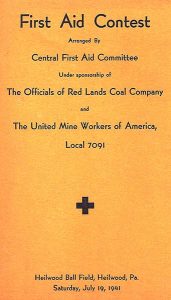 In several instances, mine rescue teams from Heilwood traveled to assist in the recovery of miners who were involved in disasters in nearby states and communities. In 1925, a safety team including Fred Haas, Pat Henry, Blair Muffley, Ralph Muffley, and Mike Thomas were called to Barrackville, West Virginia. Rescue teams also traveled to assist following major explosions in nearby Starford and Spangler. In April 1927, two Heilwood safety teams went to Ehrenfeld, Cambria County, Pennsylvania to assist at a mine explosion. And in May 1927, a team consisting of James Beveridge, Charles Covalesky, Joseph Harchuck, and Quay Henry went to Everettsville, West Virginia to assist in rescue work.

It should be noted that the coal company generally purchased complete matching uniforms for members of its first aid teams prior to them entering in competitions (see photos). Each member usually received a hat, shirt, tie, belt, pants, socks, and shoes at no cost to them, and if their team won any prize money at the competitions, it was divided equally among members of the team. In addition, the team was “feted” at a local eatery in Cresson – win or lose! 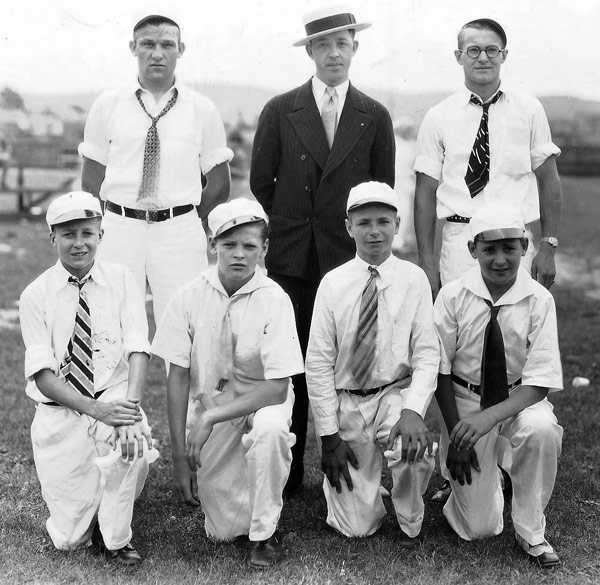 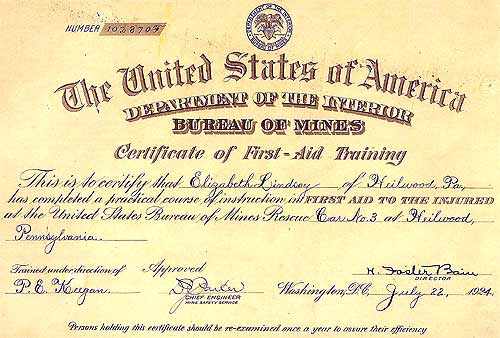 A first aid training certificate from the U.S. Bureau of Mines, Rescue Car #3. 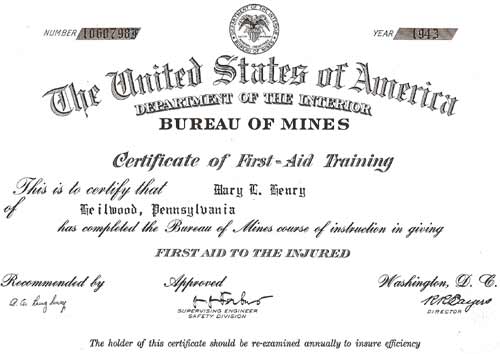 A paddle (24″ x 2″) that was used during first aid competitions to pass bandages under a patient who couldn’t be moved or lifted. It is marked “Industrial Collieries” (circa 1936-39).

When Heilwood was acquired by the Bethlehem Steel Company of Johnstown in 1916, first aid training and mine rescue work took on added significance. Not only did Bethlehem organize annual regional first aid meets involving all of its mines every spring, but they brought instructors to the Heilwood schools to provide students proper first aid training (see certificates). In the judgment of mine officials and school authorities, school was the place to begin this training so that the students would be more efficient mine workers later in their lives. Individual teams consisting of six students each were formed, and these teams competed against each other in the regional meets each spring (alongside but not against the various men’s teams). Prizes and certificates were given to the competing teams, and each local winning team moved on to district and state meets in other cities. In the mid-1920s, a team from Heilwood High School traveled to Bethlehem, Pennsylvania for a regional meet. Though the team did not win the regional competition, one of its members recalled in an interview that this trip was his first ever train ride, and that his family purchased a new white suit for him for the competition.

The Heilwood community also attended regular safety meetings held in the Town Hall. Beginning each December, the various foremen of the local Heilwood mines presented a program each month on the principles of mine safety, along with entertainment from talented people in the community. These meetings culminated in the spring with the annual first aid meet held in the Heilwood Park / baseball diamond area (see photos).

The first aid and mine rescue training continued to be an important part of the mines and schools in Heilwood for a number of years. Every year until the mines closed in 1954, first aid teams represented the Heilwood area mines at various local, regional, and state meets. Several Heilwood team members, drawing upon the first aid training they received from the company, later served as judges at various safety meets throughout Pennsylvania. 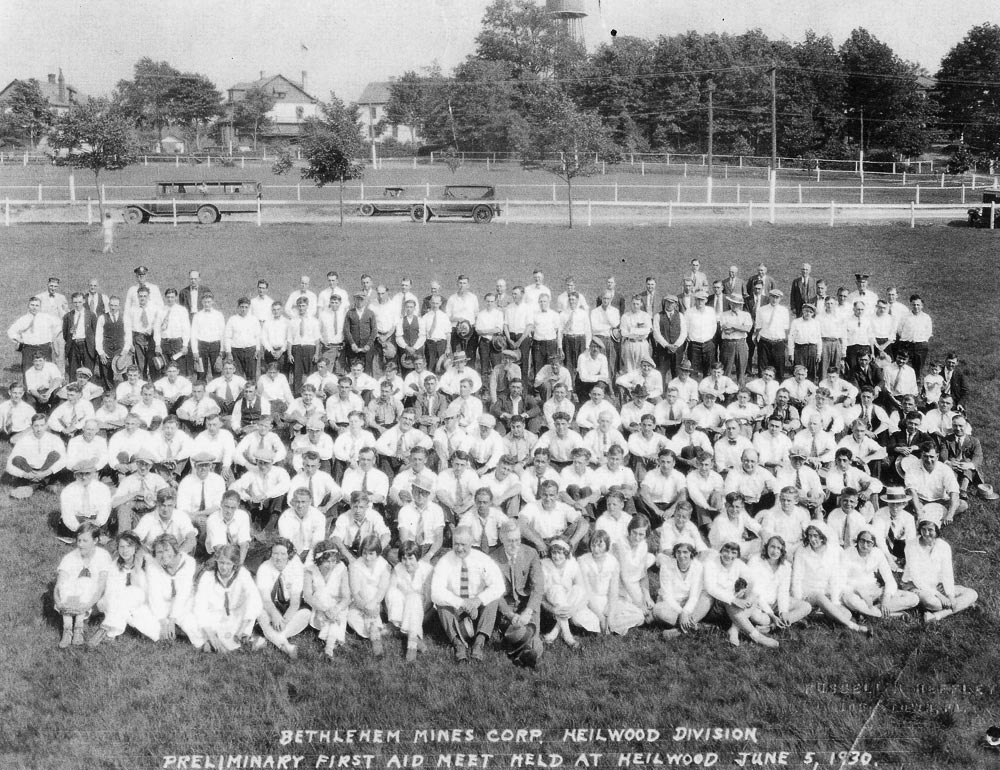