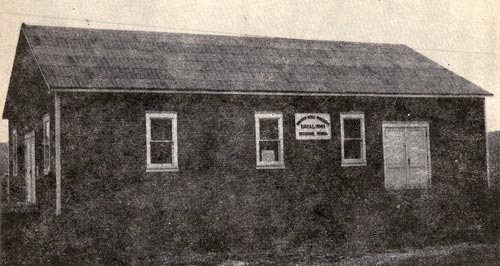 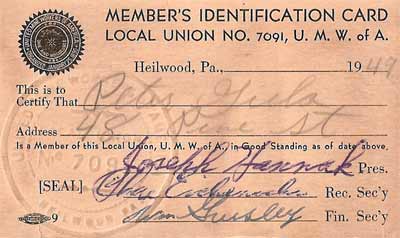 Union membership card for the Heilwood Union #7091 of the UMWA 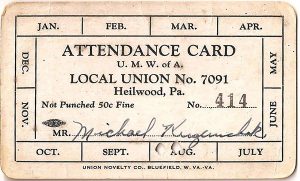 Attendance card for members of the UMWA Local #7091

“I am reliably informed that there are five sub-organizers from this Local now working in your mine, for purpose of organizing your men. Possibly I could learn names if you have not already spotted them? For well known reasons I will not sign this.” 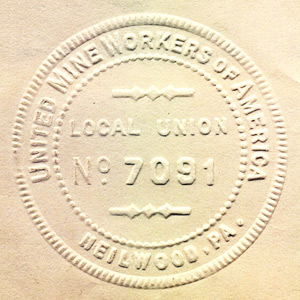 Heilwood Union #7091 of the UMWA seal

The coal mines located in and near Heilwood were always under the close supervision of the coal company. This meant that the mines were non-union, and provisions were made and enforced to keep them that way. Company men met every passenger arriving at the Possum Glory railroad station and the roads leading into Heilwood in order to determine their business in town. Any and all persons deemed as “undesirables, organizers, or agitators” were told to leave town immediately. If they had come into town on the train, they were confined overnight and put on the first train leaving in the morning.

The coal company was assisted by sympathizers (“pussyfoots”) who, although not employed directly by the company, reported on any attempts to organize the mines by local miners. Evidence of this activity includes an anonymous, undated letter sent to the Superintendent in Heilwood, regarding possible union organizers employed in the local mines (see letter at right).

In April 1906, mine workers from Shanktown (near Starford, Pa.) attempted to march into Heilwood to possibly organize the local miners, but were met and thwarted by a group of two dozen men, including the deputy constable and other men sent by the Indiana County sheriff. These men were organized and paid by the local coal company to preserve order, which included keeping any UMWA organizers out of town.

Although the UMWA was initially kept out of the Heilwood area mines, it was very active in nearby Indiana County communities. By 1910, the miners in Chambersville, Ernest, Creekside, Iselin, Clymer, and Whiskey Run had all been organized.

In 1916, in a possible attempt to maintain their workers’ non-union status, the Bethlehem Steel Company gave voluntary wage increases to its miners. In some cases, these raises were higher than those agreed upon for UMWA miners.

The greatest challenge to the Heilwood mines’ non-union status came during the Strike of 1922. The Superintendent of the mines, possibly sensing a threat by the UMWA against its mines, sent a letter to the Governor of Pennsylvania suggesting that Heilwood would make an ideal location for National Guard troops. Several days after receiving the letter, the Governor sent a detachment of troops to Heilwood to protect the mines and its workers from any possible union activity in the area, thereby guaranteeing continued coal production without union interference.

A “Scale Agreement” booklet for the #9 Bethlehem Mine, located in Brownstown (formerly the Glenside Coal Company). This was the first UMWA contract given to workers in the Heilwood area mines.

By the early 1930s, with the passage of the National Industrial Recovery Act and later the Guffey-Snyder Act, the Heilwood area miners were able to join any union of their choosing. In 1935, UMWA Local Union #7091 was chartered to represent the miners in the Heilwood area (see “Scale Agreement” booklet).

Even with the creation of Local Union #7091, some of the Heilwood miners initially did not join, and only time and continued effort brought them all into the fold. The coal company continued to monitor the miners’ union activities through information supplied by pussyfoots. In the Bethlehem Mine Police reports for 1935, the following notations were made concerning union meetings of the Heilwood local:

“My regular informer did not attend this meeting. I got my information from someone else.” (August 20, 1935)

Local Union #7091 finally disbanded in 1976, long after the mines had closed.

UNITED MINE WORKERS OF AMERICA
LOCAL UNION NO. 7091 of HEILWOOD

On a deed dated January 6, 1948, the Monroe Coal Company sold 1.663 acres of land to the UMWA Local #7091 of Heilwood for $1.00. This piece of ground was located east of Heilwood near North Heilwood/Jewtown. A short time after the purchase, members of the local got together and constructed a 30′ x 40′ single story-frame building heated by a potbelly stove. This would be the meeting hall for all members of the local union. (see top photo)

Sometime after the initial construction, the building suffered slight damage from a fire but was promptly repaired and meetings and union functions were carried on within the building for many years.