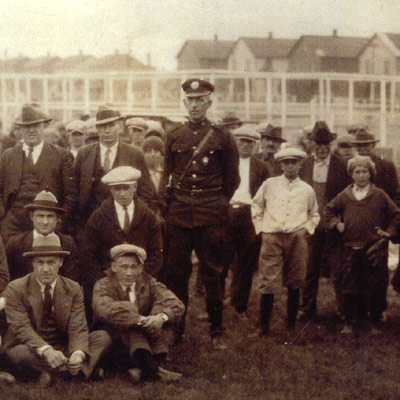 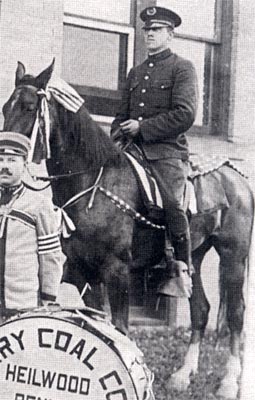 With the rapid growth of housing, businesses, and the influx of numerous ethnic groups, it soon became evident to the residents that there was a need for some type of law enforcement. A concerned group of Pine Township tax payers filed a petition for the appointment of a Deputy Constable, in order to maintain safety and the security of property within the township.

On July 19, 1905, W. Frank Craft of Heilwood was appointed Deputy Constable by Judge Telford of Indiana. Craft would have all the powers of a policeman in the Commonwealth of Pennsylvania and his service would continue as long as he demonstrated “good behavior” in his position. The Possum Glory Coal Company and the Heilwood Coal Company would compensate Craft for his services. Craft, as well as those who followed, was only a part-time constable, in conjuction with his full-time occupation.

W. Frank Craft and his successors were confronted with an assortment of criminal activities. Foremost was the activity of the group called The Black Hand. This group of individuals, through extortion and strong-handed tactics, preyed upon various ethnic groups. Demanding monies for protection from bodily harm, The Black Hand brought fear to the town. In the fall of 1906, unable to control the problem themselves, the coal companies made a request to the Indiana County sheriff’s office for the disposition of the newly created state constabulary/state police to Heilwood. In October 1906, four state troopers from the Punxsutawney barracks were assigned to Heilwood for the winter. Their patrol area extended about 16 miles, in and around Heilwood. Although we do not know when the four troopers left Heilwood, we do know that in the summer of 1907, a single trooper was assigned to Heilwood again. The presence of these troopers, while not completely eliminating The Black Hand threat, brought much comfort and relief to the residents. For more information on The Black Hand, click here.

Another problem that confronted the deputy constables was “protecting” the coal company’s mines and miners from union organizers. While the companies made an effort not to hire union sympathizers, coal mines in the surrounding areas had been brought under the union’s control and organization. In April 1906, a call went out to the sheriff of Indiana County to send a group of deputy sheriffs to Heilwood to stop a proposed march by mine workers from nearby Shanktown, who wanted to come into Heilwood and stop production. A group of 20 such deputies were sent and the threat to the mines was averted. This duty for the deputy constable would remain a constant problem and threat culminating in the stationing of National Guard troops in Heilwood in 1922.

The Heilwood coal miners worked hard during the day and when evening came, many turned to drinking. There are numerous accounts of drunken brawls having to be quelled with resulting arrests and incarceration. In addition, some of the drinking led to shootings and murders of the participants. Several of these altercations resulted in convictions, while others were never solved due to the disappearance of the participants. Obtaining alcohol in Heilwood was made easier by the presence of many illegal speakeasies and unlicensed distributors of alcohol, who in many cases, actually brewed the product themselves to augment their meager earnings in the mines. There are many recorded incidents where these speakeasies were raided with the liquor being confiscated. The normal sentence for such an activity was for the individual to pay costs of prosecution, a $500 fine, and 90 days in the work house – a severe penalty for the time!

The most tragic occurance that the deputies in Heilwood had to deal with was the death of a young baby in 1910. An unwed woman, who upon delivery murdered her child, disposing the body in the back yard. A neighbor discovered the body and within a short time, the mother’s identity was discovered. She was convicted of manslaughter (infanticide) resulting in a fine of $100 and incarceration in the Indiana County jail for one year. 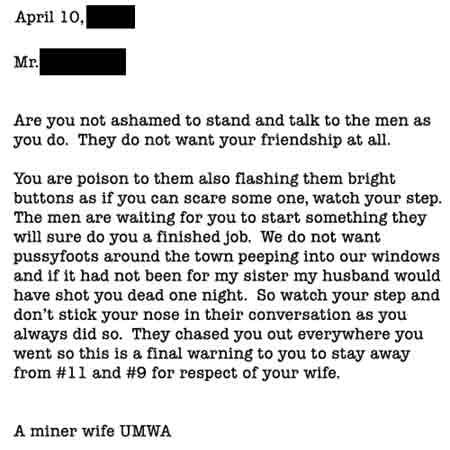 Text of an anonymous letter received by the town policeman, and later included in an annual report of police activites in Heilwood.

The following is a list of company property recovered:

Excerpts from the 1926 Bethlehem Mines Corporation police department’s report, showing activities covered by the officers in the Heilwood division.

The utilization of the constable and deputy constables for law enforcement in Heilwood continued until the Bethlehem Steel Company took ownership of the town and its mines in 1916. This change in ownership brought with it a new law enforcement officer – the Coal & Iron Policeman (see photos).

In order to understand exactly what the Coal & Iron Policeman represented, it’s necessary to go back to 1865. At that time, the state government of Pennsylvania empowered its railroads to organize their own police forces, in order to protect their investments. These officers became the Railroad Police, and had all the powers of a policeman in any major city. A year later, a supplement to the 1865 act created the Coal & Iron Police. This meant that any individual owning colleries, furnaces, or rolling mills could request that the state governor appoint policemen to help protect their property. The only criteria was one of need and there were no fees or bond required. The individual owner would send a list of names to the governor and he in turn would forward the list to the commission bureau. There were no background checks or investigative work done on any of the names – just the issuing of commissions for additional policemen to the owner. In 1871, a fee of $1 was required for each commission. By 1923, the fee for a commission was raised to $5 and the applicant had to meet certain standards, such as being a citizen of the United States, a resident of the State of Pennsylvania, and a resident of the commonwealth for at least one year immediately preceding his application. In addition, two references had to be submitted, along with an employment record for the last three years.

Bethlehem Steel had long employed industrial police for their operations and adapting this force to work with the newly created Bethlehem Mines Division posed no problem. Although available records are incomplete, the official Bethlehem Mines annual police reports from 1926-1935 give some idea as to their duties and responsibilities.

The Heilwood division covered Heilwood, Glenside, and Mentcle – an area of approximately five square miles with a population of 2,500. There were, on average, two patrolmen in the division at any time. They were either mounted on horseback, on foot, or in a motor vehicle. The officers were permitted to carry a side arm as well as a billy club, and according to some residents, knew how to use them – especially the billy club, which was sometimes used to excess.

The officers divided their patrol time: in surveilance of those indebted to the Company Store; denying access to town for any union agitators, labor agents, or undesirables; destroying stills and liquor; serving eviction notices and checking leases on houses; quelling fights and disturbances; recovering company property such as sinks, light bulbs, and stolen lumber; closely monitoring any suspected union activity as well as destroying any union literature being distributed to the townspeople. The officers were the eyes and ears of the coal company, and were known to some as “Cossacks”, “Pussyfoots” or “Gestapo”. Their relationship with the community was tedious at best and can be illustrated by a letter received by one Heilwood officer (see letter at right).

Sometimes these “eyes and ears” of the company were aided by unlikely sources. It was interesting to find that a great deal of information concerning unfavorable activities was provided to the company by ‘snitches’ from within the rank-and-file of the mine workers! This is evident in several entries taken from the annual police reports:

“I was unable to get any information on the meeting held July 23, 1935. The man that gives me the information was working that evening.”

“My regular informer did not attend this meeting. I got my information from someone else.”

Although there were numerous robberies investigated by the police, one that happened in 1919 stands out. A father of 10 children, living in Heilwood, was discovered inside the company store. He had utilized a novel method to gain access – he raised one of his young children up to a window, the youth crawled through and opened the front door, and let his father into the store. This was the third such robbery of the store. The father, in his defense, told Judge Langham of Indiana that he had to provide for his large family in some way! The resident was sentenced to pay the costs of prosecution, a fine of $25, and to be imprisioned in the Indiana County jail for five months.

The industrial police system in Pennsylvania came to an end in 1931 when Governor Pichot revoked all outstanding commissions for private police. In addition, he refused to issue any additional new ones.

Police officers would continue to work in Heilwood through the end of 1935. Bethlehem Mines Corporation’s annual police reports, including those for the Heilwood division, ended in 1935. On January 1, 1936, a new company – Industrial Collieries – took control of Heilwood and its mines.