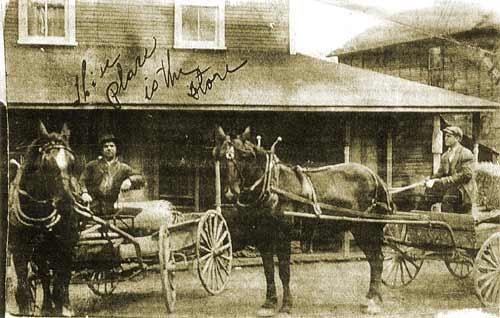 A photo taken in Jewtown, with Andy Seaman on the right and Harry “Columbus” Eskovitz on the left. Seaman’s Store is in the background, with both men seated on delivery wagons. 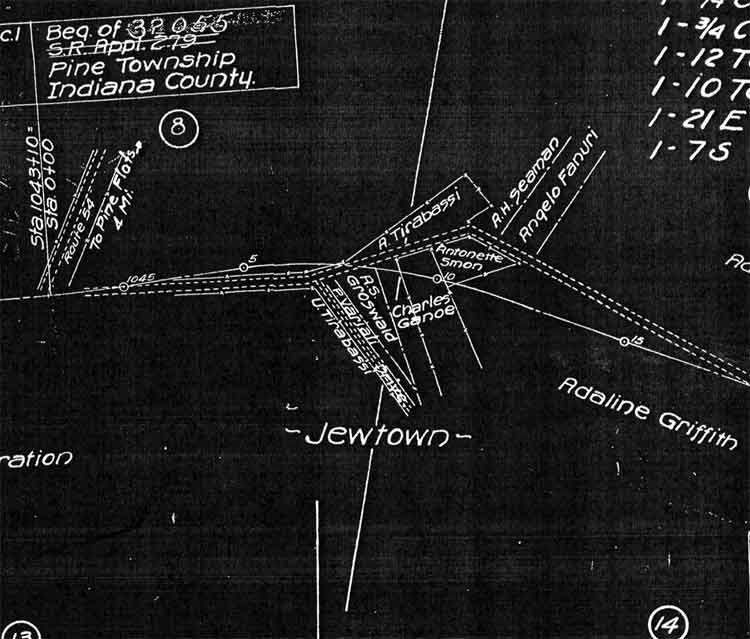 Jewtown map (circa 1928). The road to the left leads to Heilwood and the road to the right leads to Mentcle. The map also shows business and residential locations. Click to enlarge! 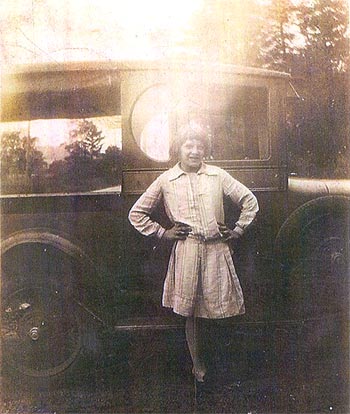 Velma Seaman, daughter of businessman Andy Seaman, standing in front of their modern delivery truck, which replaced the horse-and-buggy shown in the top photo. 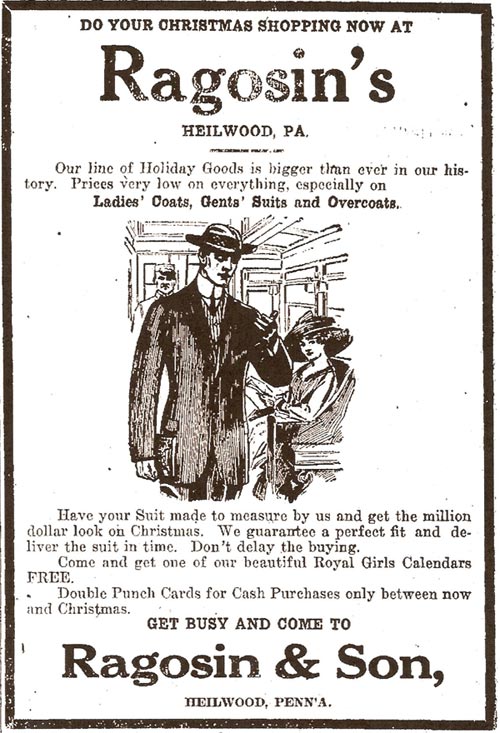 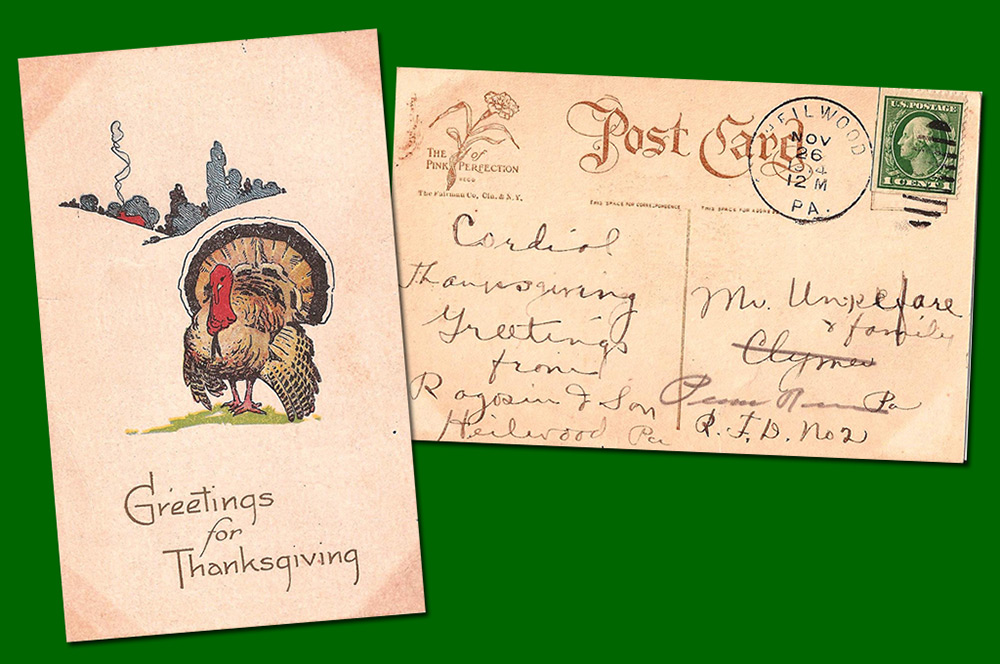 Because Heilwood was a town owned and controlled by the mine company, there were no opportunities for private enterprise to develop within the town limits. However, the people of North Heilwood – an area free of mine control – began to develop their own community and retail businesses. Though this area had a diverse population, including Italians, Hungarians, Rumanians, the majority of the individuals owning businesses were Jewish. So over time, North Heilwood became known as “Jewtown”. This name would eventually survive all of the businesses and occupants of the small community. Today, North Heilwood has less than a half dozen homes and businesses, but “Jewtown” remains the designed name of the area and is even listed on local and state maps (see map). Confusingly, the town was also sometimes referred to as “New Jerusalem” (see below).

Before its development, the property north of Heilwood was basically farm land. Deeds to the properties can be traced back to the 1700s. A man named John Griffith owned a great deal of this land, and upon his death in 1883, he deeded ownership to his son Charles and wife Adda Griffith. When Heilwood began to grow in the early 1900s, many people became interested in establishing businesses and building homes in this area. In 1907, Charles Griffith began to sell property to these individuals.

In August 1907, the first piece of property in this area to be used as a business site was sold to Tony Ratai (Ratay). He purchased 57 perches of land, upon which he soon built a two-storied building. Pine Township tax records indicate that the business was a grocery store. In addition, he may have also sold grain, straw, and hay. In 1911, Tony’s store was destroyed by fire. He rebuilt it, only to have his business sold at a 1912 sheriff’s sale, due to the non-payment of taxes.

Advertisement from a 1937 Sons of Italy booklet for the Pasquale Vanari Beer Garden in Jewtown.

Photo taken sometime during WWII in Jewtown, in front of the Lusnak home. In the window is a Blue Star Banner with three stars, representing the three Lusnak brothers then serving in the military.

Samuel R. Stahl, a local resident, bought the business at that sale. Mr. Stahl’s son, John Warren Stahl operated the business until its sale in September of 1919 to Ubaldo Tirabassi, from nearby Starford. Ubaldo continued to sell groceries and grains, but may have added another sought-after item – wine – to his bill of fare! In November 1924, Ubaldo turned the operation of the business over to his brother August. Ubaldo then moved his family to Ebensburg, Pennsylvania.

August Tirabassi continued the sale of groceries and grains until he died in 1930. A short time later, the business failed, and the Cherry Tree Bank took ownership of it and the property. That same year, the bank sold them both to A. H. Seaman (see map).

In the fall of 1907, Charles Griffith sold a second piece of property that was utilized for business. Max Brody, an unmarried man from Clymer made the purchase. Within a short time, Brody sold half of his purchase to David Ragosin from Ohio, who had recently relocated to the Heilwood area. Constructing a two-story, wooden-frame building, the two partners established a ‘dry goods’ store (clothing, shoes, socks, shirts). By 1912, Max Brody left the partnership and the Heilwood area. The business now became known as “Ragosin & Son” and continued to operate until 1919.

In 1919, David Ragosin sold his store/property to John H. Walker and Harry Byrne, both of Heilwood. Ragosin then moved his family back to his native state of Ohio where he continued selling dry goods. Walker and Byrne operated the business until 1922, at which time Walker sold his half to Patsy Variali. According to tax records, Patsy may have added groceries to the clothing line that Ragosin had sold in his years of operation. The business continued to operate until 1934, when it failed in the midst of the Great Depression. Citizens Bank of Barnesboro, Pennsylvania took possession (see map).

In the winter of 1908, the third purchase of property for a business took place when Charles T. Leuin purchased lot #2 from Charles Griffith. Leuin constructed a two-story, wooden-frame building and established his dry goods business, selling clothing, shoes, socks, and shirts. In direct competition with his neighbor David Ragosin, Leuin continued his business until October 1923. He then sold the property and buildings to A.S. Groswald from Starford. Although Groswald continued to sell dry goods in the store, he moved to New York! From that distant location, A.S. Groswald eventually sold the building and property to Enrico Moro in March 1944 (see map).

There was an additional purchase of property for business purposes, but it was a sale from Charles Leuin to Charles Ganoe in April 1920. The sale consisted of property along with buildings. Ganoe conducted his business until the property and buildings were sold for unpaid taxes in March 1934. Elsie and Fred Ganoe then bought the property in 1943 (see map).

Charles Griffith also made several sales to individuals who wanted to build private residences. The first was Joseph Glorcour (Glorious) in May 1910. Also that month, a second sale was made to Steve Wearcy (Wearly), who was employed by the Heilwood Company as a butcher in the meat market. Wearcy made an additional purchase of land in 1911.

In October 1917, David and Elizabeth Ragosin sold another piece of property to John Bobjak (Babyak). The property was a 55’ x 200’ x 55’ x 205’ lot. This piece of ground had originally been included in the larger sale from Charles and Adda Griffith to Max Brody and David Ragosin in November 1907. This lot was later sold by John and Amelia Bobjak to Harry and Maude Wallace in May 1919. In 1923, this same property was sold to Ubaldo Tirabassi, who sold it and a building back to the Babyaks (Bobjaks) in December 1935.

Newspaper headline about the “Sunday sales” scandal in New Jerusalem

On July 10, 1910, Indiana County Detective Josiah Neal, acting on information provided by an anonymous source concerning then-illegal sales on Sundays, traveled to the righteous-sounding town of New Jerusalem to observe the transactions. Upon arrival, he secured a number of persons to go into the stores and make purchases. Satisfied with the results, he promptly returned to Indiana where he swore out warrants for the arrests of the merchants along with their clerks.

Several days later, Deputy Sheriffs Charles McGrady and Orrin Stiffler traveled to New Jerusalem and arrested eight local businessmen. Those arrested were brought to Indiana and charged with conducting business on the Sabbath. After paying their fines in the amount of $9.66 each, they were released from custody (see photo).