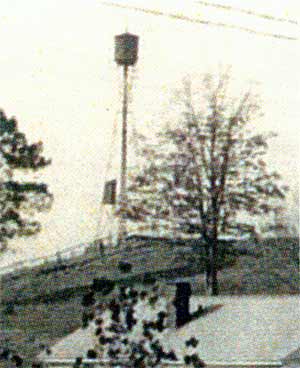 Built around 1906, the searchlight and tower, located at the corner of First Avenue and Chestnut Street, represented the coal company‘s attitude towards “undesirables” coming into town (mainly union organizers and peddlers). In all probability, the light was used to scrutinize not only the roads but also to observe the late train into town at 10:00 PM. With this device, the town policeman could easily see new arrivals and upon questioning, determine their business in town. If the newly arrived traveler was considered an undesirable, he would probably be escorted to either the town “lock-up” or the hotel for the night, and placed on the 8:00 AM train the next morning – straight back out of town!

An older resident of town tells the story that many travelers, who heard of or experienced this inspection by the searchlight and policeman, would jump from the moving train several miles from the station and walk through the woods into town, undetected (at least for a short while).

The residents of the town were also affected by the presence of the searchlight. One said that “it was a thing to be afraid of.” Another suggested that “it was like living in a concentration camp.”

How long the searchlight remained in use is not known. However, pictures of the town taken in the early 1940s still show it standing in its original location (see photo). A reminder of the “good ole days”!