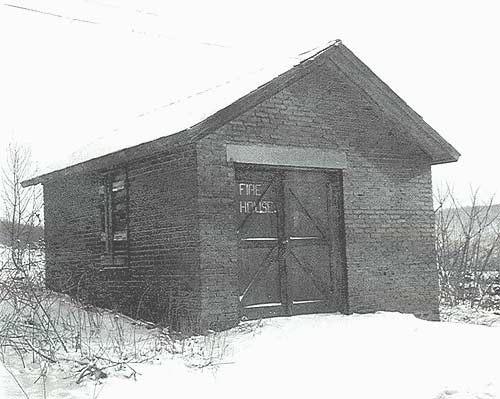 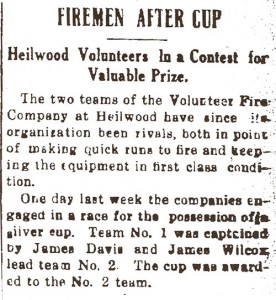 The original Hose House was built in March of 1907 and located off the alley behind house #33 on Second Street (see photo). Painted red, the structure contained: a hose cart that was pulled by members of the volunteer fire company; fire extinguishers; hand tools; and ladders that were purchased from the Bent Rung Ladder Company of Indiana, Pa.

Twenty-four fire fire hydrants were located throughout the town to assist the volunteer firefighters.

A 1911 photograph of the town shows that a large tower was situated at the same location as the Hose House. This was possibly the first Fire Whistle/Siren used to alert the town of a fire.

The Hose House remained at this location until the mid-1940’s, when the coal company began selling all the homes in town to residents. At that point, the Hose House was relocated to the long abandoned Hoist House building directly below the Carpenter’s Shop near Sunnyside (see photo).

A newspaper article dated May 7, 1913 notes that Heilwood had at least two Volunteer Fire Company teams consisting of an unknown number of men (see article at right). These two teams were very competitive in making quick runs to a fire and keeping the equipment in first-class condition. This rivalry resulted in a practice competition whereby the winner would be awarded a silver cup. Team #1 (captained by James Davis) and Team #2 (captained by James Wilcox) competed against each other and the silver cup was awarded to Team #2.