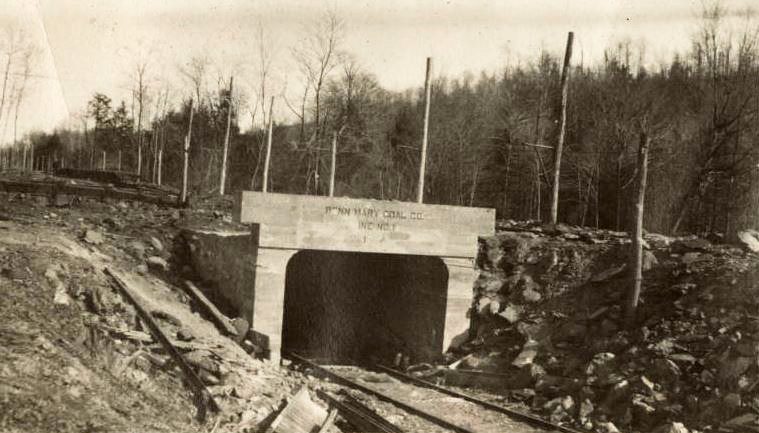 Possum Glory Mine, one of the two earliest mines in Heilwood, circa 1905. Penn Mary probably made the new designation over the opening when they later took over. Photograph courtesy of Historical Collections and Labor Archives, Penn State University Libraries.

Original mine map showing the location of the Possum Glory #1 Mine (labelled “No 1”), relative to the town of Heilwood. Click on the map to see a larger, extended version. 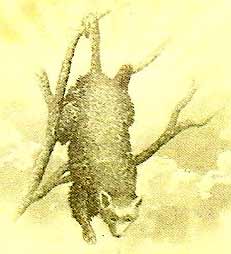 Closeup of the possum from the 1906 Possum Glory Letterhead

A companion company, the Possum Glory Coal & Coke Company, was chartered on April 16, 1901 in Philadelphia, Pennsylvania. The newly chartered company had a six-member board of directors and $100,000 worth of capital stock.

The June 19, 1901 issue of The Indiana Democrat reports that surveyor Robert Mullen was making a topographical survey of the area of the new town. This survey would determine the placement of the water works along with coke ovens. The water works were constructed at the designated site, but the coke ovens were never built. A possible reason is that Alfred Solvay, an original stockholder in the Possum Glory Coal Company, had just invented a new process to coke coal and was having 200 coke ovens constructed at Lebanon, Pa. Evidently, the stockholders were satisfied with shipping the Heilwood coal to Lebanon and having it coked in the newly constructed ovens at that location.

It wasn’t until three years later, in October 1904, that the board of directors, now headed by J.H. Weaver, made a visit to Heilwood to begin work on their initial construction contracts, totaling $100,000.

In this initial phase, over 100 houses for workers and foremen were constructed, as well as a power house to supply electricity for the mines and homes. In addition, two coal mines opened in the spring of 1905. Within a year of these initial offerings, the Possum Glory Coal & Coke Company increased their capital stock to $300,000 to further develop the area.

At first, the production from the two mines opened in May 1905 was not to be sold on the open market. Instead, the coal was shipped by rail (Cherry Tree & Dixonville Railroad) to the Solvey Process Company of Syracuse, New York, and the Pennsylvania Steel Company of Lebanon, Pennsylvania. Only after production had reached a million tons a year did the coal from these mines start to reach the open market. This arrangement was due in large part to the fact that prominent members of the board of directors had “significant” interests in these two companies.

Portions of the mines’ production were also used to provide steam-generated electricity for the mines, and to provide the town with lighting. House coal was also available (for a charge, naturally) to all mine employees.

According to records, many of the supplies for the mine were purchased locally. Elmer Haggens of nearby Spruce supplied either oak or chestnut motor ties and the Clymer Manufacturing Company of Indiana supplied mine cars.

Mr. James Starford, formerly of the Morrisdale Coal Company in Clearfield County, would become the General Superintendent. He maintained this position until 1906, at which time he was replaced by Harry Dowler.

The Possum Glory Coal & Coke Company franchise lasted until April 1909, at which time the board of directors (J.H. Weaver no longer visibly present) voted to “sell its franchise and all its property, real, personal and mixed, to the Penn Mary Coal Company for $275,000.” From that point on, the Penn Mary Coal Company had complete control of the Heilwood area coal fields.