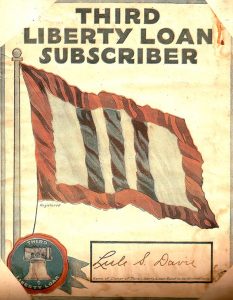 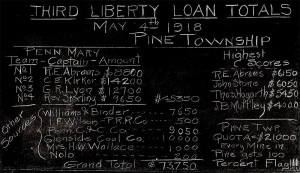 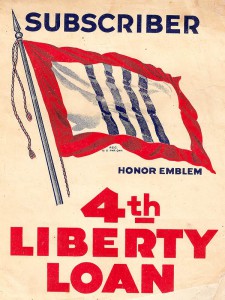 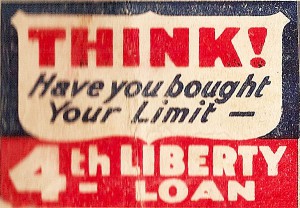 Receipt for a payment for the 4th Bond Drive in Heilwood, 1918. 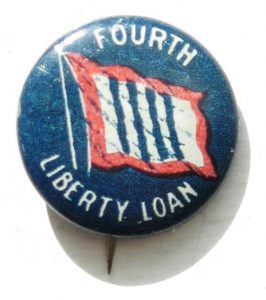 During World War I, numerous residents of Heilwood and the surrounding area were either drafted or volunteered to serve in the military. Although the exact number of locals who served during the war is unknown, a service flag with 18 stars was displayed at a meeting held in the Town Hall in March 1918, with each star representing an individual serving in the armed forces at that time. In addition, the community itself was asked to participate in a number of activities to support the war effort.

Probably the most important of these activities was the purchasing of Liberty Bonds, which were being sold by the federal government. Viewed as an act of patriotism, the purchasing of Bonds by Heilwood and Pine Township residents was actively promoted by the coal company.

Initially, the sale of Liberty Bonds received a passive response throughout the country. William Gibbs McAdoo, the Secretary of the Treasury, decided to utilize Hollywood movie stars, who traveled the country in support of the Bonds. Stars such as Charlie Chaplin, Mary Pickford, Douglas Fairbanks and others appeared at “Bond Rallies” to drum up public support.

In all probability, none of these movies stars made a trip to the Heilwood area. But the local communities themselves did promote the sale of Bonds by holding their own community rallies. These rallies often involved speeches from county officials, in which they stressed the importance of purchasing Bonds, and likened the miners to “soldiers” in the effort to keep a steady supply of coal available for the Allies to defeat the Axis. One such rally held in Heilwood lasted over two hours, with various speakers such as T. R. Johns from the coal company and Father Brosse representing the Catholic Church. In addition, the Heilwood Band provided music throughout the rally.

It’s unknown how many Bond Rallies were held in Heilwood during the war years, but records indicate that several such drives were successful. The 3rd Liberty Bond Drive saw Pine Township given a quota of $21,000 and the township subscribed a total of $70,000 (see photo).

During the 4th Liberty Bond Drive in October 1918, Pine Township (which included Heilwood) was divided into districts, with each district assigned to an individual with responsibility to attain a predetermined goal. With a goal of $84,000, the actual amount subscribed was $91,000. T. R. Johns and Mrs. Harry Wallace headed the campaign (see photo).

In addition to purchasing Liberty Bonds, the miners of Heilwood and surrounding communities were urged to give 100% effort in the production of clean coal for the war effort. Industrial poet Rufus T. Strohm, in his poem “Doin’ Their Bit” put it this way:

It’s a whale of a job that you’re facin’
You fellows with shovels and drills,
For the railroads an’ fac’tries is racin’
An’ so is the shops an’ the mills;’

An’ there mustn’t be haltin’ or slowin’
Of engine or belt or machine,
So dig into the work-make a showin’
But in loadin’ the coal, keep it clean!
If your output is dirty an’ bony,
An’ your’re blind to the slate an’ the rock,
Why, your love for your country is phony,
Or your patriotism’s in hock;

For you’ve got to be white, or your’re yellow,
Since there ain’t any ‘twixt-an’-between,
So come-be a regular fellow,
When your loadin’ the coal, load it clean!
If a transport chock-full of our younkers,
Takin’ our boy and my boy to france,
Has a load of bum coal in her bunker,
She’s got less than a ghost of a chance; for sh’s bound to destruction and ruin.