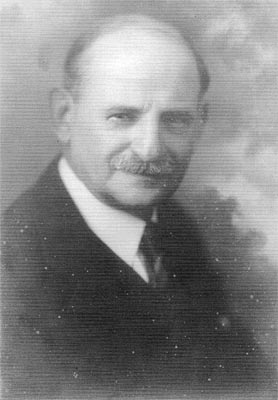 Thomas Richards Johns (T. R. Johns), the son of Welsh parents William T. and Angeline Richards Johns, was born on October 13, 1865 in Coalmont (located in the Broad Top section of Huntington County, Pennsylvania). At the early age of 12, he entered the mines of the Broad Top coalfields as a “trapper” and “breaker boy.” Between 1877 and 1885 he worked as a miner in both central Pennsylvania and Bessemer, Alabama. After leaving Alabama and returning to Pennsylvania, Johns found employment as a clerk, cashier, and bookkeeper for several merchants and businesses in the towns of Brisbane and Houtzdale.

In 1888, at the age of 23 and with the help of his uncle (a local mine superintendent), Johns joined the Berwind-White Coal Company near Punxsutawney as its chief office clerk. After working there for seven years, he left to assume similar positions and duties with the Rochester & Pittsburgh Coal & Iron Company in Indiana County from 1895-1913.

In 1916, Bethlehem Steel acquired the Penn Mary Coal Company’s properties in Heilwood and retained Johns to direct the operation. Sometime later, he became the General Manager of the Bethlehem Mines Corporation in Johnstown (later known as Industrial Collieries Corporation), which managed and operated the steel corporation’s affiliated coal mines. Under his leadership, Bethlehem Mines Corporation expanded its mining properties and coal producing facilities in Pennsylvania and West Virginia. By 1940, Johns was Vice President of the Industrial Collieries Corporation, and Bethlehem’s holdings included nine mines employing over 7,000 employees. Johns also promoted company sponsorship of the competitive first aid meets, which involved the mine safety and rescue teams of the constituent mines and publicized mine safety preparedness. Johns was also instrumental in building the corporation’s political base in Johnstown and Cambria County between 1923 and 1942, serving as a political agent in those mining communities where the company had vested economic and political interests.

T. R. Johns retired from the Industrial Collieries Corporation in 1942 at the age of 77, having devoted 27 years to Bethlehem Steel. He was also a member of or affiliated with the following coal mining organizations: the Advisory Board of Mining at Pennsylvania State College (serving as chairman for some time); the Mining Advisory Board at the Carnegie Institute of Technology; and the U. S. Bureau of Mines. He also held memberships in the Engineers’ Society of Western Pennsylvania; the American Iron & Steel Institute; the American Institute of Mining and Metallurgical Engineers; and the Lehigh Valley Engineers Society.

Johns was also a member of the Pennsylvania Society of New York; the Johnstown Chamber of Commerce; and the Sunnehanna Country Club. His church affiliation was with the Westmont Presbyterian congregation. He also held membership in numerous groups of the Masonic order, including: the Maple Lodge of Greensburg; the Acacia Club of Williamsport; Consistory: John W. Jenks Lodge, No. 534, F. & A. M., Punxsutawney (of which he became a life member in 1920); and the Jaffa Temple, Altoona, Ancient Arabic Order Nobles of the Mystic Shrine.