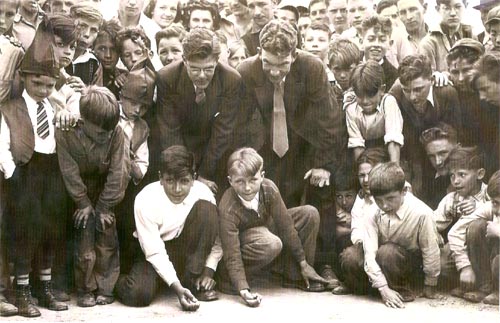 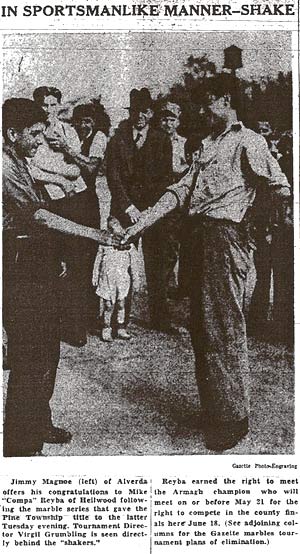 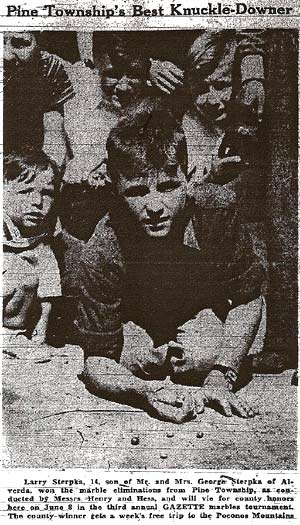 Stones that were deliberately chipped into neat globes, some dating to the actual Stone Age, have been unearthed in excavations in Europe and Asia. But it wasn’t until around 1884 that marbles began to be mass produced in the United States. Made of clay and sometimes called “commies,” these were manufactured until the end of World War I (see photo). Thereafter, clay marbles were produced in Germany and imported. While not always perfectly round or colorful, the commie was inexpensive. In response to the growing popularity of marbles, manufacturers began experimenting with making marbles from other materials. In time, porcelain and glass were used to make marbles of different colors and patterns (see photos). The price for the newer porcelain marbles was substantially more than the older commies – about 90 cents for 1000 vs. about 20 cents for 1000. One other type of marble that was produced was the “steelie” or ball bearing, which was produced by various companies into the 1960s. Sometimes known as a “cannonball,” the steelie was frowned upon when also playing with glass marbles/shooters, for obvious reasons.

Interviews with long-time residents of Heilwood reveal that both men and women have fond memories of playing marbles. The games were played in the alleys, streets, and sometimes on the local school playground. Most of the participants were sons and daughters of coal miners, and having little if any money were unable to afford the more expensive glass/porcelain marbles, and usually only had the commies. However, a more affluent youth might occasionally bring a bag of the much sought-after glass marbles to a game. A resident relates the following story:

“One Sunday morning, a friend and I where coming home from church and another friend of ours from First Street asked if we wanted to play marbles. That friend had a bag full of nice glass marbles and was eager to play. We told him we would have to go home, change clothes and have something to eat, but would return. Within a short time the two of us returned and promptly dispatched the First Street friend of all his glass marbles. The only thing remaining was the bag that held the marbles and with a little bartering, we soon had that too – in exchange for several of the newly won marbles.”

The game itself is rather simple. Draw a circle and place all of the marbles inside it, and each participant takes turns trying to knock their opponent’s marbles out of the circle. To knock marbles out, each participant utilizes a “shooter” marble, which is considerably larger than the other marbles (see photo). In an interview, a resident stated that: “If you had a glass shooter, you would be considered a big shot by the other players.”

“knuckles down” – keeping one knuckle of your shooting hand in contact with the ground;

“heighties” – lifting your knuckle from the ground while shooting.

“creepsies” – you could not advance the shooter beyond the spot where you originally picked it up;

“cleansies” – removing anything from in front of your shooter;

“bombsies” – dropping your shooter on the target marble, which sometimes meant using “steelies” as the bomb;

“keepsies” – at the end of the game, you kept the marbles that you knocked from the ring.

The popularity of the game was so widespread among the youth in Indiana County that a countywide tournament was conducted by The Indiana Evening Gazette beginning in 1938. The county was divided into 16 sections: 14 played against each other for district honors, while both Indiana and Blairsville had enough children to automatically qualify for the finals. The district champions all met in Indiana at the Fairgrounds for the finals. The winner of the tournament was given an all-expenses paid trip to Wildwood, New Jersey to participate in the National Marbles Tournament.

Shooter marbles compared to a regular one

In an interview discussing the game of marbles in Heilwood, one woman who played as a youth went to a nearby cabinet and withdrew a small bag which contained her marbles from games played long ago. She even showed off her shooters – the most prized of all the marbles. It was obvious that this bag held many fond memories.