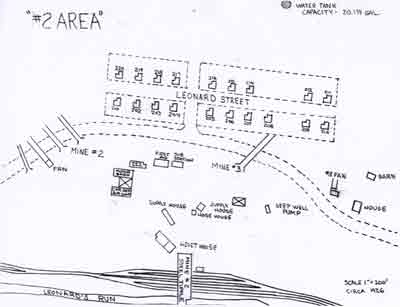 In 1905, the Heilwood Coal Company opened Mines #2, #3, and #4 about a mile south of town. This was followed by the Penn Mary Coal Company‘s opening of Mine #5 in 1906 in the same area. This location became a very important source of coal and employment. It was also here that the coal companies constructed a number of houses to accommodate many of the workers.

Company-owned rental housing in the #2 Area was very limited (see map). However, this limited housing was augmented in 1912 by the construction of a 16-room boarding house known as boarding house #3. It was located within a quarter mile of the mine complex in the direction of Heilwood. This boarding house quite possibly housed both single miners as well as some families.

The #2 Area is sometimes refered to as “Little Italy” – no doubt a reference to the great number of Italian families who settled there. However, other ethnic groups such as Poles and Slovaks were represented too. With such a diverse ethnic population, some conflicts were inevitable.

Reports of shootings, fights, and stabbings – sometimes fatal, were reported in The Indiana Evening Gazette. In some cases, the perpetrater immediately left the area, never to be located or prosecuted for his crime. It was also reported that the notorious “Black Hand” was very active in this area.

In searching property deeds, we find that the immediate area beyond the coal company’s housing and mining complex was privately owned. It was on these properties that several enterprising families established their homes and began businesses, in direct competition to the Company Store located in Heilwood. Tax records show the Cicero, Leone, Ratay, and Vona families as merchants on these properties.

In February 1906, Charles and Frank Cicero began buying property adjacent to the mining complex. By 1910, they not only had a store (canned goods, dry goods, mining supplies) but had also constructed five houses on what became known as “Cicero Farms”, “Ciceroville”, or “Cicero Colony” near the store. Additional construction raised the number of houses to 10 by 1924. The newly constructed houses varied in size, from three-room shanties to six-room, two-storied designs. The Cicero store remained a viable entity until 1930, at which time the store as well as the houses disappear from the tax records.

Mike and Mary Leone bought their property in September 1909. Tax records list them as merchants in 1912. Their business consisted of a general store (canned goods, dry goods, mining supplies, fresh meats), a dance hall, and rooms for rent. A fire in February 1915, reportedly caused by a defective flue, destroyed their general store, meat shop, and flats. In addition, the fire spread to a double house nearby, resulting in total damages of $12,000. Their losses were partially covered by insurance. It wasn’t until 1921 that the tax records label them as merchants again. The Leones remained in business until April 1929, at which time their property and buildings were sold at a sheriff’s sale to the First National Bank of Barnesboro, Pennsylvania.

Tony and Mary Ratay purchased the first of their properties in November 1910. Additional properties were added in 1922, 1924, and 1926. Similar to the Cicero family, the Ratays had rental houses adjacent to their family business, a general store (dry goods, canned goods, mining supplies); a gas station/repair garage, a post office, and an outside brick oven, in which they baked fresh bread daily. Tax records indicate that Tony was a sometimes farmer, deliveryman, and merchant (the latter in 1921). Tony was listed as a merchant until 1928, at which time his classification was that of a laborer, and the store ceased to exist on records.

Samuel and Sarafinna Vona purchased their property along the Heilwood to Nolo Road in 1910, and immediately established their store (general groceries, canned goods, possibly some dry goods) a short distance from the Leone property. Of all the merchants in the #2 Area, the Vona family business was the shortest lived, continuing only until 1913, when the property was sold and the store was abandoned.

The demise of the Cicero, Ratay, and Leone businesses, as well as the entire #2 Area, can be attributed to a single factor. In 1928, Bethlehem Mines abandoned every single one of the Heilwood area mines. This meant that Mines #2 and #3 in the immediate area, as well as Mines #6, #7, and #8, ceased operation. The only mines to remain open would be the Bethelem Mines #9 and #11 in nearby Brownstown and Mentcle. This closure also meant that the housing and the boarding house were no longer maintained. Miners and their families were told to move into Heilwood – that is, if they were employed at either of the two mines. If not, they would have to move to another community, where work was available.