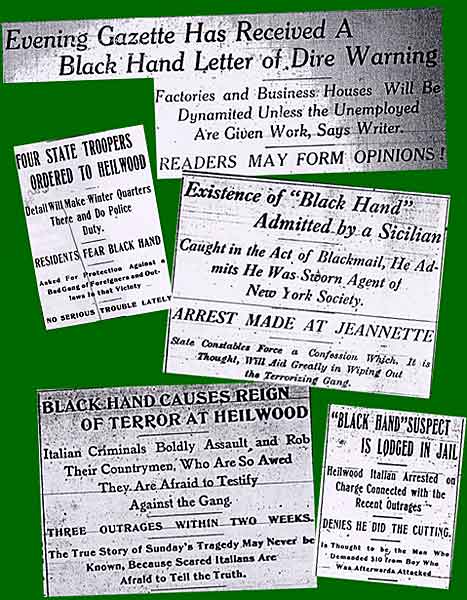 Headlines from The Indiana Evening Gazette about the Black Hand.

Heilwood, along with other surrounding communities, experienced serious criminal activity in its early years. Stabbings, shootings, and property damage came to be associated with a group known as the Black Hand.

Initially, the group consisted of Italian immigrants. Through violence and extortion they demanded and received (in most cases) money from their own fellow countrymen. Members of the organization were not timid!

As the June 19, 1906 edition of The Indiana Evening Gazette reported:

Several weeks ago, a well-dressed Italian man, accompanied by others, came to Heilwood from Barnesboro. Upon arriving in town, the man “approached” a Heilwood resident (Italian) and told him that he needed $3 to pay for his new shoes. The Heilwood resident refused to give the man the $3 for the shoes. Sometime later, the Heilwood resident was found with his left ear lobe nearly severed and his throat badly cut.

And in another incident involving an Italian resident of Heilwood:

The resident was approached by a group of men and asked to join the “bum society” which would cost $10. The resident refused to join and “reported” the incident to the coal company. A short time later, the resident was found lying near the Heilwood Inn, his wrist as well as both sides of his neck had been slashed.

Such open acts of violence had a terrifying effect on Heilwood’s Italian population, as well as the entire immigrant community. Fear of reprisal made testifying against known Black Hand participants almost suicidal, and the organization flourished, becoming even more brazen. The deputy sheriffs were practically at the mercy of the criminals and the townspeople were greatly alarmed.

In October 1906, a call went out to the State Constabulary (State Police) headquartered in Punxsutawney. A short time later, four members of the unit were assigned to Heilwood for the winter, under the command of Corporal Eugene Calvert. Their job was to assist the deputy constables already in town, and to assure the population that the unwanted violence would subside or come to an end.

Very few other printed instances of criminal activitity can be found via local sources. However, it’s known that the State Constabulary conducted several raids in nearby Barnesboro, targeting suspected Black Hand meetings. In one such raid, 14 men were arrested. All of them were convicted and sentenced, and it was thought at the time that these men constituted the entire Barnesboro organization.

Although only several specific Black Hand-related incidents can be found in the local newspapers of the time, many other incidents were probably never reported for fear of reprisals. Also, the coal company would have wanted to keep as much bad publicity out of the newspapers as possible!

One exception occurred when the November 17, 1914 issue of The Indiana Evening Gazette printed the following letter, under threat, in order for their readers to “form their own opinion”:

I respectfully request and demand you to publish the following in your paper.

Notice is hereby given that if the unemployed are not given work by the factories and businessmen of Indiana, there will be one of the greatest rains of terror there ever was in a town. All the factories and business houses in town will be blowed and burnt up. Also, the wages of not less than $2.00 a day. If you do not publish this in your next issue woe unto you and your families as they shall surely die. All business men are warned that whenever a man asks for work to give it to him under the penalty of the secret six.

Signed by the members on order of the Chief.

A simple prank or a cause for alarm? You be the judge!

Although Italians are most directly linked to the Black Hand, it’s quite possible that other ethnic groups adopted similar approaches to obtain money from their own countrymen.

In an interview with a long-time resident of Heilwood, the Black Hand was brought up for discussion. The resident just smiled and then made a “throat-slashing” gesture with his arm – nothing more was said!