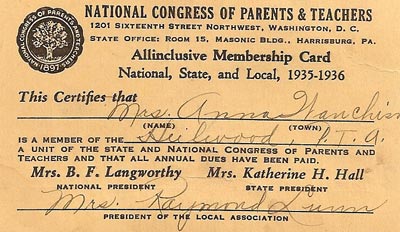 Although there is little information on these groups, the women of Heilwood had the opportunity to participate in or join various social groups.

The earliest mention of such a group was in 1922, when the Pine Tree Bridge Club held many of their meetings in the Club Rooms on the 2nd floor of the Company Store. Meeting each Tuesday evening, the group played cards and did other activities, such as masquerade parties. They even held a sleigh-ride party to Nicktown in November 1929. This group was still active into the mid-1940s.

The Parent Teacher Association was first mentioned in 1929 (see photo). The group held monthly meetings in the high school. This group also lasted until the mid-1940s.

Several other social groups are mentioned in the local newspaper society pages of the time. The Officials Club, the Whoopee Touring Club (which played the popular game Touring at their weekly meetings), and Ladies Bridge Club all held meetings in Heilwood. Also, the Presbyterian Church had a Ladies Aid Society, which held homemade candy sales and pie socials. St. John’s Catholic Church had its Sodality Group as well as the Women’s Society, which held dances, bingo, and card parties in the Club Rooms on the second floor of the Company Store.