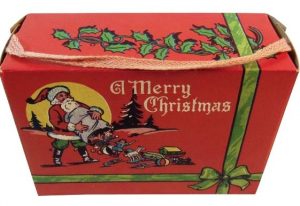 The wages in the coal mines in the early part of the 20th century did not permit many ‘extras’ beyond the payment of the company store bill, house coal, and the monthly house rent. Little if anything was left to the family to buy gifts for the children at Christmas time.

Possibly sensing this, the mother might sew a simple article of clothing or make a doll, while the father might carve a whistle or make something as elaborate as skis (see photo) as presents on Christmas morning. In an interview with a resident of Heilwood, she remembers waking up on Christmas morning and in going down stairs, discovering one of her stockings containing a few nuts, a piece of fruit, and a nickel. She said that ‘I was darn lucky to get it.’

Few miners’ families had a Christmas tree in the house. If they were lucky enough, the father and several of the children might venture into the nearby woodlands to cut down a tree for the house. Decorations were simple homemade ones and in some cases, candles were fastened to the tree for illumination. A former resident shared her memory of her father gathering up ‘greens’ from the woods along with grasses and making a manager scene-‘it took up half of the living room’.

Food for Christmas Day was usually prepared by the mother and in many cases, assisted by some of her older children. It might be a simple chicken, a woodlands animal, or the family goose. The meal would be supplemented by various vegetables from the family garden canned or preserved from the previous summer. Sometimes even simple honey cookies for dessert brightened the table for all to enjoy. The foods were simple, prepared with love, and no one left the table hungry.

It was a practice by the coal company that the children of the miners would all be given a treat for the Christmas holiday. Each miner’s child received a small box of assorted candies and a piece of fruit – in most cases an orange – something almost exotic to the children (see photo). In another interview with a long-time resident, he recalls with a smile, receiving that small box of candy and referred to it as a ‘suitcase’ since it was rectangular in size and had a woven, string like handle with which to carry it. Another resident, although not a miner’s child, remembers somehow receiving the same treats and ‘eating the entire orange – including the skins – such a treat that nothing would be wasted’.

The families that belonged to the Greek Catholic Church celebrated Christmas with services on or near January 7, which was in accordance to the Julian calendar rather than the Gregorian calendar (which put Christmas on December 25).