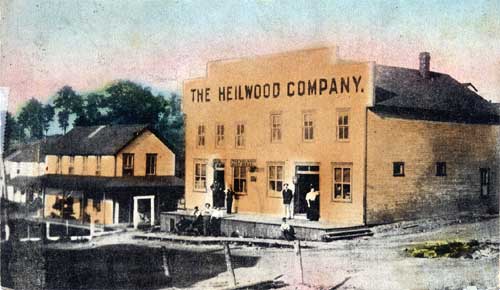 View of the original company store (circa 1908)

John was born April 11, 1872 at Marion Center (Indiana County), the son of Horace John Thompson and Annie I. McMurray. He attended his first school at Decker’s Point and later in Marion Center. In addition, he spent two years at the Indiana Normal School in Indiana, Pennsylvania.

At 19, he became associated with his father’s mercantile business in Decker’s Point and became sole owner of the business in 1894, when his father returned to Marion Center and turned his attention to real estate. In 1904, John moved to Heilwood to assume the manager’s position in the newly constructed Heilwood Company Store.

During his time in Heilwood, J. M. Thompson would hold the position of store manager, postmaster, and manager of the Heilwood dairy farms. In 1914, when the Cambria Steel Company of Johnstown purchased the Penn Mary Coal Company operations, Thompson was relieved of all his duties and replaced by James Eck.

John went back to work for his father in the Marion Center National Bank, where his father was one of the founders as well as president. On May 5, 1928, at the age of 56, John McMurray Thompson passed away.