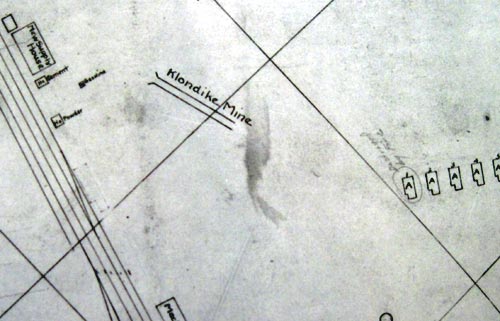 Map showing approximate location of the Klondike Mine (circa 1919) 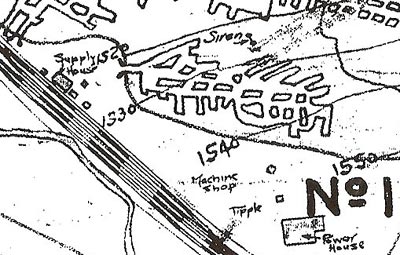 This later map shows the relatively small-scale development of the Klondike Mine (the mine opening is located to the right of the Supply House, next to the "1520" line).

A map of the Heilwood area from around 1919 shows an unknown, unofficial mine located between the two Penn Mary mines southwest of Sunnyside. The mine is designed “Klondike Mine” (see map at right) on the map.

It appears that this might have been a so-called “country bank” mine – these were mines where an outcropping of an underground coal seam emerged on an open hillside, and these were sometimes mined by the land owner. In the case of the Klondike Mine, that would have been John S. Bowers.

Generally associated with informal, unregulated, undercapitalized, and underequipped operations, country bank mines produced limited amounts of coal from uncertain reserves. They were often operated by a single person or small group of individuals for personal use only, or for very limited coal sales.