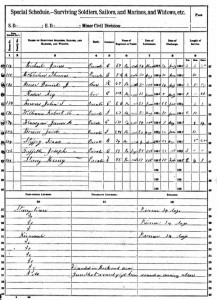 John S. Bowers was born on January 3, 1842 in Cherryhill Township (Indiana County). His father was also named John Bowers, and his mother’s maiden name was Mary Hempfield. Bowers received his education in the country schools of Cherryhill Township and at the age of 17, he and his family moved to Pine Township.

During the Civil War in 1863, Bowers enlisted in the Union army at Pittsburgh, becoming a private in the 2nd Battalion (Company E) of the Pennsylvania volunteer infantry for six months service. (see photo)  Upon returning from the war in 1864, he purchased a small farm in Cherryhill Township and along with his wife Sarah Jane (Deyarmie), farmed there until 1869. Bowers then purchased 106 acres in Pine Township, which he continued to farm until 1901, when John Heisley Weaver purchased his property. This property became the primary piece of land upon which the town of Heilwood was begun in 1904, including the acreage for the first school.