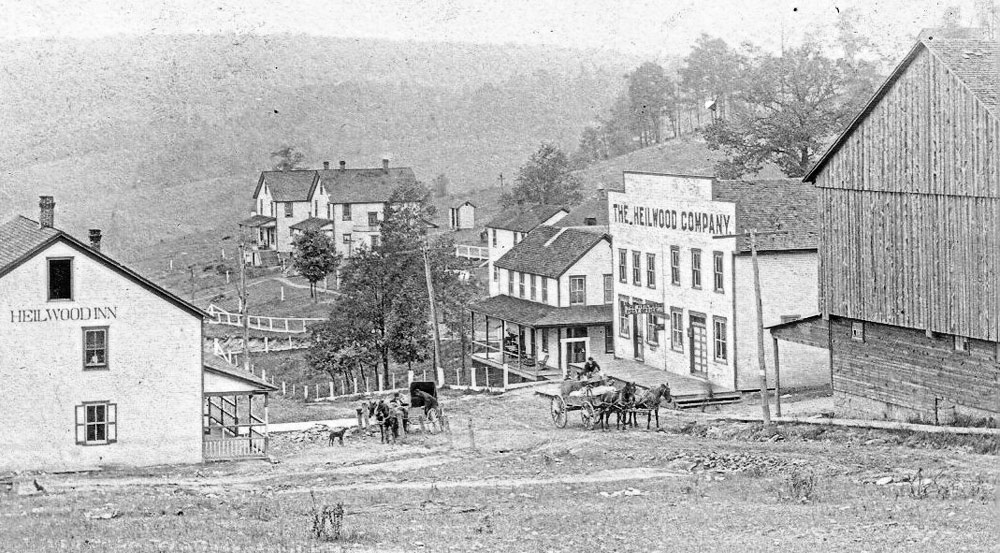 Photo of central Heilwood from circa 1908, showing (L-to-R): The Heilwood Inn; the first Heilwood Company Store and Post Office; the Livery Stable 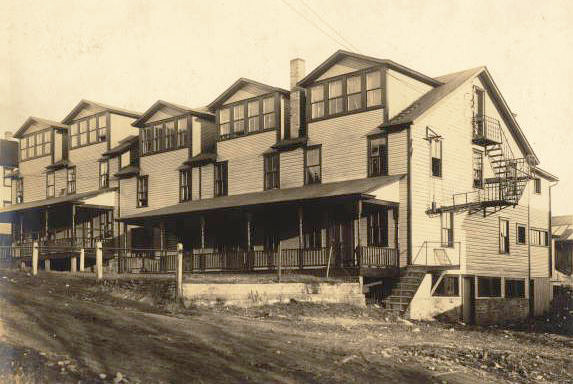 Heilwood Inn, circa 1910 (note the fire escape on the right side of the building). Photograph courtesy of Historical Collections and Labor Archives, Penn State University Libraries. 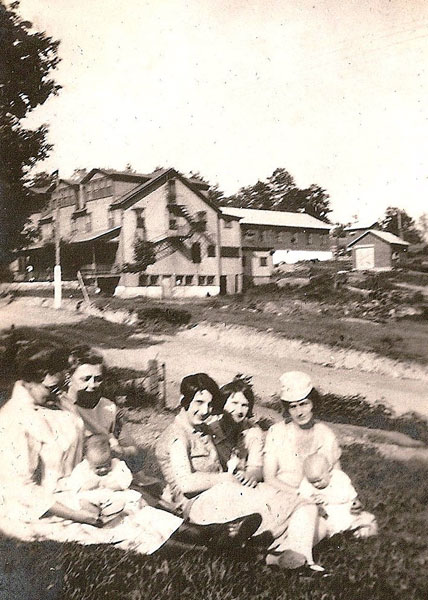 Photo showing a group of women with the Heilwood Inn in the background. To the right of the Inn is a vacant lot where the Meat Market/Butcher Shop used to sit, before it was destroyed in a 1924 fire. 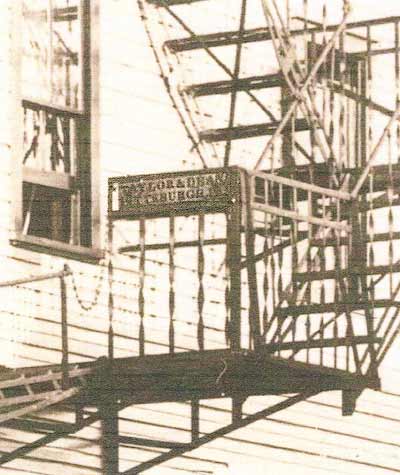 Close-up of the fire escape added in 1909, manufactured by Taylor & Dean of Pittsburgh.

Although it was not mentioned specifically in the initial building contracts of 1904, the Heilwood Inn was built in the fall/spring of 1905. It was a two-storied, wood-frame building meant to be utilized by the businessmen and coal officials who would be visiting the new town. The specific contractor for the building is not known at this time, but we do know that the Hoover & Miller Company of Glen Campbell, Pa. did some work in its interior.

In 1909, the Inn was enlarged. Jack London, formerly of the Hyde Murphy Company and by then the Superintendent of Building for the Penn-Mary Coal Company, supervised the addition of ten bedrooms to the top story. Each added room had two dormer windows (see second photo). As a safety feature for the additional floor, a steel fire escape was also added to the lower side of the Inn (see photos). The fire escape was manufactured by Taylor & Dean, a subsidiary of the Pittsburgh Iron & Wire Works Company, located on Market Street in Pittsburgh.

While many of the specifics about the Heilwood Inn remain unknown, we do know that it had a bar (and the only liquor license in town), a dining room, and of course, rented rooms. Some of the boarders included the Constabulary (a state police force established in 1905), which was stationed in Heilwood to protect the citizens from the notorious “Black Hand.”

As an interesting sidenote, in a letter from the Heilwood Inn’s manager to the mine superintendent at the time, the manager stated that his wife “has gotten worked up to such a fever pitch with the… Constabulary, that we must make a change and find some other place for them to board.” 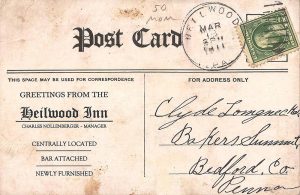 1911 postcard advertisement for the Heilwood Inn

The Indiana Democrat, a weekly newspaper in nearby Indiana, carried the following ad in its April 18, 1917 edition: “Wanted a good first class cook, an assistant cook, and a laundress” and were instructed to contact “Charles McGinley, Hotel, Heilwood, Pennsylvania.”

In 1921, the Inn suffered a fire on the third floor that caused considerable smoke and water damage, but the building itself was saved.

Charles McGinley continued as manager of the Heilwood Inn until his death in 1924.

In April, 1926, a banquet was held in the Heilwood Inn to honor the recent graduates of a two year mine course.  Among those honored were: Charles Covalesky; Eugene Croyle; Fred Haas; Ralph Muffley; Mike W. Thomas; W. T. Trinkley; Blair Muffley.

No further information can be found concerning the Inn’s operation between 1926 and 1932, when the Heilwood Inn was taken off the Pine Township Tax Records (indicating either a cessation of operations or the destruction of the building).