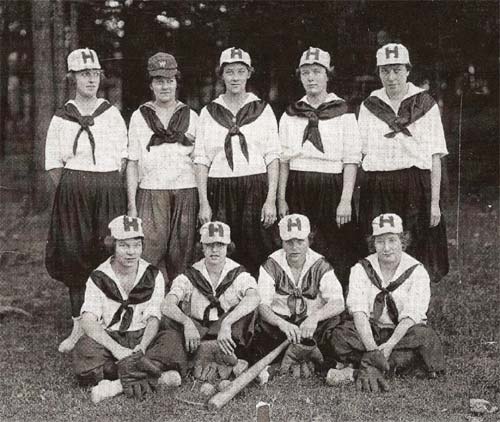 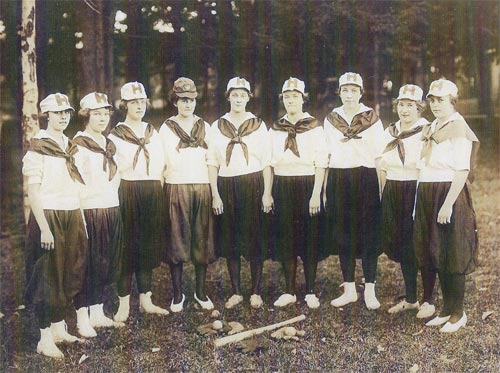 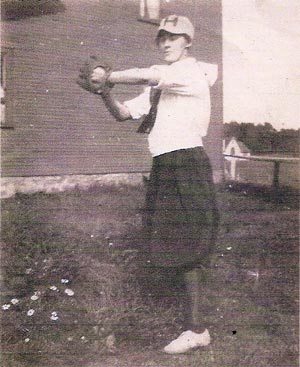 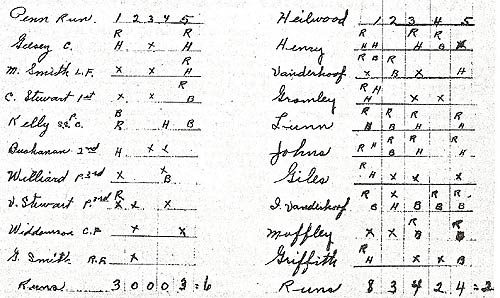 A homemade scoresheet from a July 17, 1919 game between Heilwood and Penn Run.

Women began playing competitive baseball in the late 1800s. The first public game was played in 1875, not so much as a serious sporting competition, but rather as entertainment for its male organizers. The two teams that day were called the “Blondes” and the “Brunettes.” The players took the field wearing long skirts, high-button shoes, and long sleeves, as well as high neck lines. This attire certainly didn’t contribute to ease of fielding or batting.

Soon, female players began to adopt a style of dress that was being worn at the time as a bicycling costume – namely “bloomers,” which were a loose-fitting, Turkish style of trousers. The origin of the word “bloomers” can be attributed to members of the press who credited Amelia Bloomer with the design of the outfit, though in actuality, it was Elizabeth Smith Miller who created the first pair and showed them to Ms. Bloomer in 1851.

By the 1890s, these Bloomer Girls were forming baseball teams and barnstorming across America, challenging local men’s teams to an afternoon on the diamond. The majority of the members of the teams were female; however, it was a common practice to have at least one or possibly two male members as “ringers” on the team. One such male, who actually donned a wig and bloomers for the job, was future Baseball Hall of Famer Rogers Hornsby, who toured and played for the Boston Bloomer Girls in 1912.

In Heilwood, several local girls decided to organize a team and play baseball too – not the version of the game that used a ‘mush ball,’ but the actual hard baseball the men were using. So in 1919, the Heilwood Bloomer Girls baseball team came into being. Team members included (see photos): Margaret Auton (outfield); Mildred Barndollar (outfield); Gert Giles (shortstop); Bertha Gromley (1st base); Carrie Henry (pitcher); Elsie Lunn (2nd base); Pearl Muffley (3rd base); Irene Vanderhoof (outfield); and Lottie Vanderhoof (catcher). In addition, other members are mentioned (by last name only) in various newspaper clippings of the time, including: Griffith; Hammond; Johns; Mallory; and Wanchisn (see clippings).

The team’s home games were played at the Heilwood baseball field adjacent to the Catholic Church. Where the girls obtained their gloves, bats, and baseballs is unknown at present. Their uniforms were reportedly sewn by the players themselves.

Other nearby “bloomer girl” teams were located in Alverda, Brush Valley (Mechanicsburg), Moss Creek, Penn Run, and Starford. Actual records can be found for the games in Penn Run and Brush Valley. The first game with Penn Run was July 4, 1919 with a final score of 34-9 in Heilwood’s favor. According to a homemade score card for the second game against Penn Run on July 17, 1919 (see below), that game only went five innings. The brevity of the game may be attributed to the fact that the girls traveled to the games by horse and wagon, and after each game it was customary that the home team to provide a meal for their visitors. So a shortened game would leave time for the post-game meal, plus travel time to be home before dark.

The Heilwood girls played at least eight games through the summer of 1919, winning all but one – a loss to the Starford team by a score of 11-10. There are also reports of two games in 1920 – a home-and-home series with Brush Valley (Mechanicsburg), which was swept by Heilwood. Approximately 500 people attended the five-inning game at Mechanicsburg on August 15, 1920, and were “afforded about an hour and a half of pure genuine fun” (see newspaper clippings). There is no mention of any additional games in 1920 or 1921, so it appears that the Heilwood Bloomer Girls ceased playing baseball after 1920.