Shortly after organizing the Boy Scouts in England, Sir Robert Baden-Powell observed the young ladies of his country organizing groups similar to the ones he had organized for the boys. Working with his sister, Agnes, the two organized the Girl Guides in 1910. As their popularity grew, the Girl Guides caught the attention of Juliette Gordon Law, who was originally from Georgia but living in England at the time. Sensing this organization was something that the young women in the United States were missing, she returned to her native Savannah, Georgia along with the ideals of the Girl Guides.

On March 12, 1912, Juliette Gordon Law organized the first troop of Girl Guides in the United States in Savannah, Georgia with 18 original members. A year latter, the group’s name was changed to the Girl Scouts.

Newspaper reports indicate that in February 1925, the Heilwood Troop’s membership had grown to 26 girls and was arranging for uniforms. The July 2, 1925 Indiana Evening Gazette reported that the Heilwood troop held a strawberry festival on the Presbyterian Church lawn, probably in part to raise monies for the uniforms. Later that same month, the girls spent a week at Camp William Penn near Cherry Tree, Pennsylvania.

In August 1926, the Heilwood Troop spent a week at a different Camp William Penn, located on Little Mahoning Creek about 1 ½ miles from Georgeville. This particular camp was also the official camp of the Indiana County Boy Scouts of America.

The next report involving the Heilwood girl scouts is dated August 4, 1933, when the girls camped out at Cameron’s Bottom. Mrs. Lisle Learn, Laverne Donahue, and Mrs. Deprefontaine (the Presbyterian Minister’s wife), along with her husband, assisted the campers. 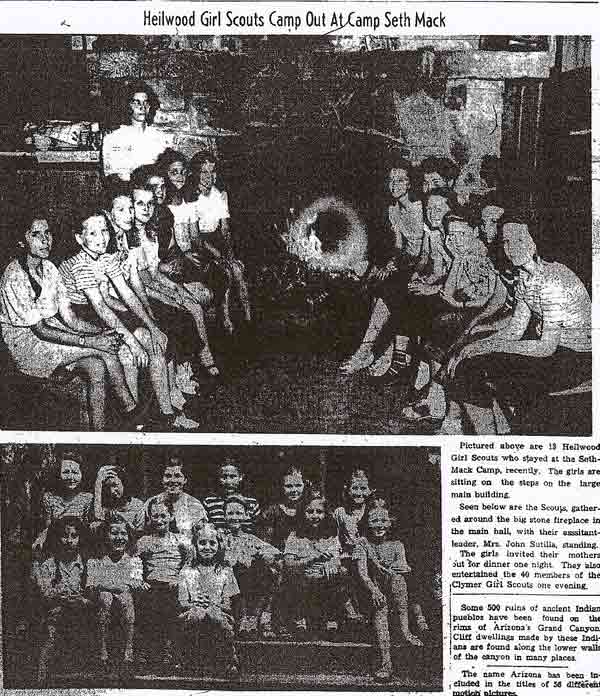 On October 3, 1947, the Heilwood Girl Scout Troop held their first Court of Awards. Not only did they award Second Class Badges to members of the troop, but the occasion also marked the first anniversary of their troop being reorganized (see photo).

Following the Court of Awards, the Heilwood Girl Scouts participated in the following reported activities:

Adult leadership for the newly formed troop of Girl Scouts was provided by the following women from Heilwood; Mrs. Helen Learn; Mrs. Gladys Lindsay; Mrs. Edna Lunn; and Mrs. Emma Sutila. The reconstituted troop conducted their meetings in the Club Rooms on the 2nd floor of the Revloc Supply Company Store.