William Lockery Johnson was born December 13, 1851 near Lycippus, Mount Pleasant Township, Westmoreland County, Pennsylvania. The second and eldest son of Michael and Anna (Traugh) Johnson, he received his education in the local schools and while doing so, helped his father with work around the farm. Sometime later, after receiving some carpenter’s training from his father, William was apprenticed to Ben Simpson, a carpenter from Latrobe, and spent the next four years learning the carpentry trade. After learning the necessary skills to make him a master carpenter, William set about to establish his own business.

Employing over 120 carpenters, Johnson’s company was responsible for building houses from the excavation of the foundation to completion of the entire house. He not only built a large number of homes in Westmoreland County, including nearly the entire town of Mammoth, but he was also quite active in Indiana County, particularly in Heilwood.

According to available records, Johnson worked in Heilwood from the spring of 1905 through the spring of 1906, building almost 75 homes, including the three-room shanties as well as larger 4-to-6 room houses that included coal house/outhouse combinations. In addition to housing for individual families, he also constructed the following: the first boarding house (including a front porch and detached wash house); the meat market adjacent to the Heilwood Inn; a sand house; the mine office at the #2 mine complex; and an addition to the hospital / physician’s office on First Street.

Following a 25-year career during which he constructed thousands of houses, Johnson then turned his business toward the construction of churches and schools.

He constructed the Trinity Reformed Church at Scottdale, the Reformed Church at Pleasant Unity, and the Methodist Episcopal Church at Lycippus. In 1912, he built the Insane Asylum in Somerset County at a cost of over $100,000 and contracted with 18 masons to supply the cement for the construction of the building. Additionally, he erected a number of larger homes for the country residents, utilizing architectural plans from well-known architects.

William’s success in his chosen profession was due in large part to his willingness to meet all of the obligations and requirements of his contracts. Customers who contracted with his company were confident that they would receive the best materials available and also excellent labor for their money. Additionally, he always supervised each and every construction site personally, which sometimes meant two or three jobs simultaneously. 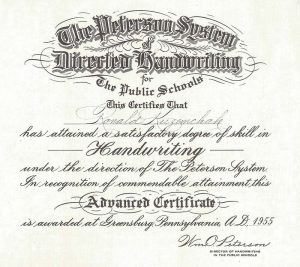 Aside from his contracting business, William was also a Mount Pleasant Township school board member for nine years, serving at different times as both President and Vice President. A Democrat, he also was a member of the Reformed Church.

Mr. Johnson was married on January 30, 1871 to Catherine Hysong, a daughter of John B. and Elizabeth J. (Myers) Hysong. One daughter, Mary Evelyn, was born to the couple. Mary Evelyn later married Mr. P. O. Peterson of Scottdale, who was the proprietor of the Peterson Business College and the county supervisor of writing for a number of schools in Fayette, Indiana, and Westmoreland Counties (see photo).