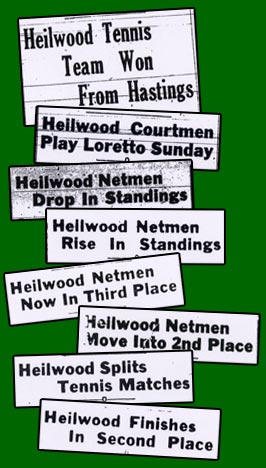 On May 31, 1916, a local newspaper reported that “The young men of Heilwood have formed a club, known as the Heilwood Tennis Association. There were 14 charter members and six more joined at a recent meeting.” However, no further mentions of this organization have been located.

Competing in the Northern Section of the CCTL, Heilwood’s competition included Nanty-Glo, Loretto, Spangler, Hastings, and Carrolltown. Singles and doubles matches were held at each event.

Heilwood finished the 1940 season in second place behind Nanty-Glo, compiling a record of 23 wins and 17 losses. Elliott, McCardle, and Moschanko were selected to the league’s All-Star Team.

The Heilwood Tennis Team played on the clay courts adjacent to the baseball diamond. The courts, constructed in 1915, were enclosed by netting suspended between telephone poles with a locked gate. The boundaries of the courts were outlined by a rubber-type tape fastened to the ground.

For the 1941 season, only four out of eight scheduled matches can be found. During these matches, Heilwood was able to win 2 points out of a possible 20 (in each scheduled match, a total of 5 points was possible, by winning all of the individual matches).

At the end of the season, Heilwood had won a total of 7 points while dropping 28, and found themselves in 8th position out of the nine teams in the league. Three new players were added to the Heilwood roster for the ’41 season: V. Trinkley, S. Salley, and Keirn. They replaced Lindsay, Marzhauser, McCardle, and Moschanko.

For 1942, no records about either the Cambria County Tennis League or the Heilwood team could be located. It’s possible that the country’s involvement in World War II curtailed local athletic activities.