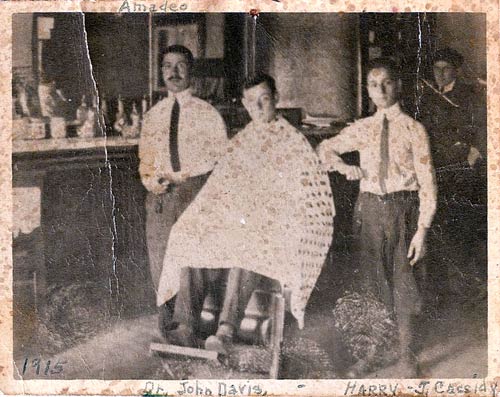 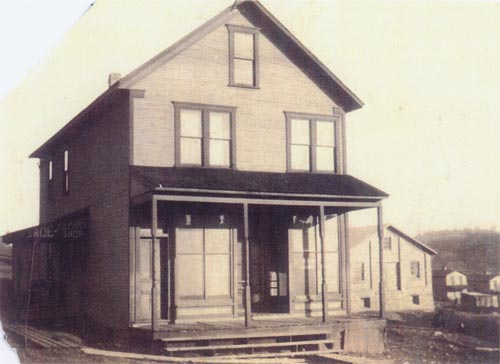 Barber Shop, circa 1920. Note the ‘Shoe Repair’ sign on left side of the building run by Joe Nemish.

Duck pin bowling at DeMay’s Barber Shop (circa 1950). This version of bowling used a 6” ball and pins that were two-thirds the size of ten-pin equipment. Also, three balls were thrown in each turn instead of two.

The first evidence of the establishment of a barber shop in Heilwood is from a letter to M. L. McGowan dated June 6, 1907, in which Mine Superintendent Harry Dowler acknowledges the near completion of the Town Hall and inquires about the “renting of our bowling alley, pool room, and barber shop.” In another letter, dated December 30, 1907 to O.G. Nelson of Lovejoy, it appears that Nelson is applying for a position in the barber shop and is instructed by Dowler to “come up and talk this matter over with me and I think we can come to an understanding that will be beneficial to us both.” However, there is no record of the hiring of either McGowan or Nelson.

On June 16, 1908, Dowler contacted the Covalt & Smith Company of Pittsburgh about having a Bystrom Water Heater and Sterilizer sent by Adams Express to Heilwood. In another letter, Dowler orders a compressed air spraying outfit for two chairs, again from Covalt & Smith.

Pine Township tax records show that Harry Patchin was a barber in Heilwood in 1909-1910. Additionally, the 1920 Federal Census shows that Harry DeMay was also a barber living in Heilwood.

As noted above, the original location of the barber shop was in the Town Hall. However, in the fall of 1934, Harry DeMay moved the barbershop across the road to the former Justice of the Peace/Squire’s Office/Express Offices. In addition to the barber shop, a shoe repair shop operated by Joe Nemish was located in the rear portion of the building (see photo at right). The second floor of the “new” barber shop was used at times as an auxiliary classroom for the Heilwood schools. Also, the local Red Men Lodge used it as a meeting place.

In 1944, Harry DeMay would purchased the Barber Shop property from the Monroe Coal Company for $250.  Sometime after the purchase, he would  install a second barber chair to the shop and was joined sometimes by his brother Amadeo and son Eugene, in cutting hair for the townspeople.  In addition, Enrico Moro was employed as a second barber.

By 1950, Harry added a pool table, two ‘duck pin’ bowling alleys and even a juke box for dancing.