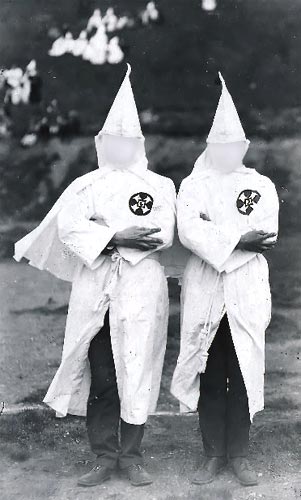 Two KKK members from the Barnesboro area (which could include Heilwood) sometime in the 1920s. There appear to be more members in the background.

August 19, 1925 newspaper account of a KKK picnic held on a farm near Pine Flats.

In December 1865, a group of Confederate Army veterans gathered in Pulaski, Tennessee to form a social club, but within a few months, this group evolved into a secret organization whose members wore white sheets and held nighttime horseback rides, spreading terror across the South – the Ku Klux Klan (KKK).

As its membership grew, the KKK primarily directed its intimidation tactics towards African-Americans who had just been given their freedom. Things soon became violent, with floggings, mutilations, lynchings, and shootings. As the violence and general lawlessness grew more pronounced, the Klan’s activities came under the scrutiny of Congress and the Reconstruction government, and the group’s power and influence faded by the early 1870s.

The KKK remained dormant until the World War I era, when immigration from eastern and southern Europe, combined with the mass movement of southern blacks to northern industrial areas, became alarming to many Americans who believed that the country was being overrun by “alien” peoples.

In the fall of 1915, William J. Simmons, a Spanish-American War veteran who had dreamed of starting his own fraternal group, gathered 15 others and traveled to Stone Mountain, Georgia. It was here that Simmons lit a match to a wooden cross and the Ku Klux Klan was reborn.

Initially, Simmons had hoped to make money from the resurrected group’s membership dues, but growth was slow until he hired Edward Clarke and Elizabeth Tyler in 1920 to promote the organization. Clarke and Tyler aggressively promoted the new KKK as pro-American, which also meant anti-black, anti-Jewish, and anti-Catholic. Soon, the list of adversaries also included Asians; immigrants; bootleggers, dope, graft, nightclubs, and roadhouses; violation of the Sabbath; sex, pre- or extramarital escapades, and other scandalous behavior. The stances on social vigilance found a receptive audience in many communities, including Heilwood.

In its August 31, 1921 edition, The Indiana Evening Gazette reported on rumors circulating that a mysterious organization along the lines of the Ku Klux Klan was being formed, with Johnstown as its headquarters. It was also reported that a person from Pittsburgh had held several meetings and that he made a strong appeal to “100 percent, red-blooded Americans.”

There must have been some merit to the story – on October 18, 1923, The Indiana Evening Gazette reported that a cross was burned on a hill near Heilwood as a possible warning to the many bootleggers and foreigners in the community. Further KKK activity in and around Heilwood is evidenced by an order form for the purchase of five Klansman’s robes and helmets, dated August 16, 1924 (see photo). On November 9, 1924, The Indiana Evening Gazette reported that 20 members of the KKK entered the Heilwood Presbyterian Church during services and presented a donation to the pastor. Additional evidence is found in a paid receipt (see photo) for membership in the WKKK (Women of the Klu Klux Klan), dated May 27, 1925.

Local newspaper accounts published in The Indiana Gazette, The Indiana Weekly Messenger, and The Indiana Progress make it clear that Heilwood-area members of the KKK attended meetings, picnics, and other Klan get-togethers at a “Klan Farm” located in the Pine Flats area. Additional local sites in Indiana and Cookport were also documented gathering places.

One Heilwood resident also recalls that an area mother used her husband’s Klan robes to make three white dresses for her young daughters, although she would never divulge the source of the material to any of her friends.