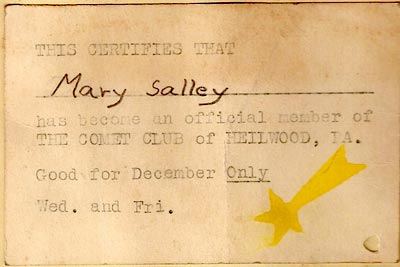 The following is a memory of the Comet Club, as written by its founder, Christine (Beilchick) Anderson:

“During World War II, there were no activities for young people in the area. With gas and tire rationing, traveling was a luxury. Our High School Sunday School class at the Heilwood Presbyterian Church decided to start a club where the young people could get together. We got permission from the coal company to use the club rooms above the company store.

We needed money to start so we held a raffle and the prize was a Thanksgiving turkey. With the proceeds, we bought cleaning supplies and met in mass to start cleaning. Imagine eight girls cleaning with Spic and Span resulting in chapped hands and blood shot eyes.* While working, we decided to name it The Comet Club (see photo). We then made drapes and appliquéd comets on the corner of each panel.

On opening night, the members played games or just talked. Those that knew how to dance taught the others. We then had dancing every Friday night from 7-11 p.m. Before long the place was quite full.

Since we were short money, I purchased a record player. I was slowly repaid through the weekly dues of 10 cents. I was the main chaperone. Other parents were asked to help but few could make it.

Most of our attendees were high school students since all the other young men were away in the service. Often kids came from other towns. We didn’t allow alcoholic beverages or anyone under the influence on the premises. There was never a problem. The kids appreciated having a place to meet.

Our club dances continued until 1946, following the end of World War II. I got married and no one took over the leadership. The kids were older and found new interests. Gas became more plentiful so the club disbanded by the years’ end. The Comet Club had just become a happy memory.”