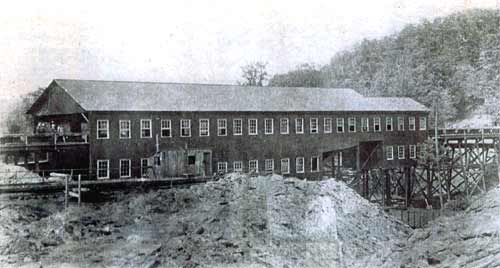 With the extension of rail lines into the Leonard’s Run area, previously proposed mine openings were developed. By July 1905, Mines #2, #3, and #4 were all open, although #3 and #4 were only in the developmental stage. In April 1906, Mine #5 (a “drift mine”) was opened. It was around this time that plans were made for a new steel tipple to service all of the newly opened mines in the area.

In September 1906, the Wilkins Company had drawn up a set of plans for the tipple. Approval was granted and by December, Elmer Haggens of Spruce, Pennsylvania was delivering oak lumber for the construction of the approach ramp to the tipple. The contract to build the steel tipple itself was awarded to the Lucius Engineering Company of Pittsburgh in January 1907. Working sporadically through the winter, construction was complete and the building was ready for machinery to be installed by May 1907. Heyl & Patterson Incorporated of Pittsburgh installed the loading and conveying machinery. By the end of May, the machinery was performing satisfactorily and the tipple was operational.