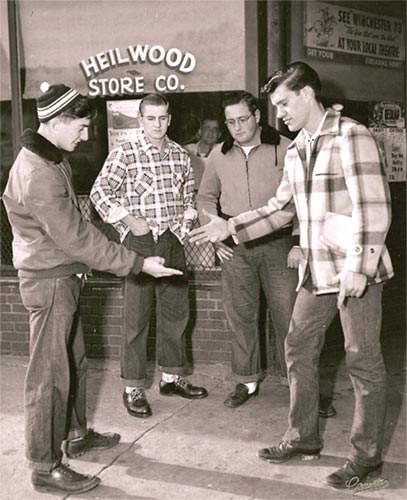 The hand game of Morra goes back many thousands of years to the times of the ancient Greeks and Romans. Brought to Italy in the 16th century from Turkey, Morra flourished in Italian society and eventually made its way to America with immigrants in the late 1800s and early 1900s.

Most evenings in Heilwood, after their work in the mines was done for the day, miners would gather around the front of the company store. Before long, the sound of them yelling and throwing fingers at each other would usually be heard. It was neither a heated argument nor a fight—it was the game of Morra. It wasn’t unusual to see some of the youth of the town participating too.

The object of Morra is to guess the total number of fingers that you and your opponent “throw” (show) each other, using only your right hands. If either player guesses the correct total by shouting out his selection, he is awarded one point. If no one guesses the correct sum or the players guess the same number, the game continues until there is a clear winner. As each player wins a point, he keeps score on his non-throwing, left hand (see photo). The total number of points to win the game is pre-determined prior to the game. Morra is a game that teaches players to carefully watch their opponent—in time, you get better at predicting their next move.