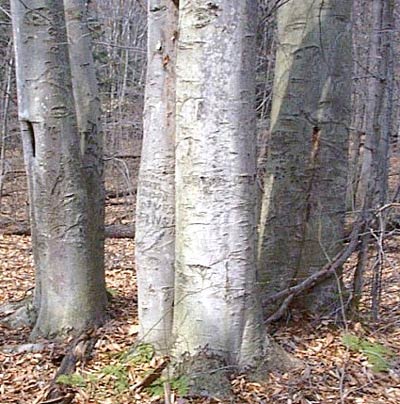 A grove of trees near Heilwood with lots of carvings on them. 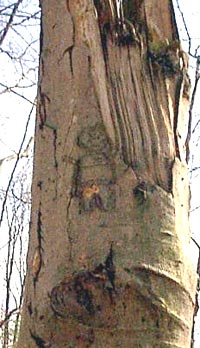 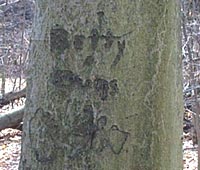 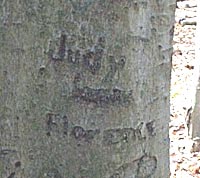 “Arborglyphs” are names, dates, symbols, messages, and designs that are etched into the bark of trees. Around Heilwood, these trees were usually aspens and beeches.

As the youth of Heilwood ventured into the surrounding woodlands in pursuit of game or just a walk to the old swimming hole, many took the opportunity to carve their names or initials into the smooth, grey bark of the beech trees. It was usually just a simple attempt to record their name (or the name of their favorite girlfriend) into the bark of the tree for everyone to see for all times.

While initially just thin incisions, over time the lines of these carvings have expanded. However, there was never any intent to damage or destroy the tree. Carving one’s name into a tree wasn’t considered an act of vandalism back then – this all took place long before the notion or widespread adoption of tree care standards.

While walking in the woods that surround Heilwood, I’ve discovered some of these carvings done so many years ago. Look at the carvings in the photographs in this section and quite possibly you’ll see an arboglyph with your name on it!