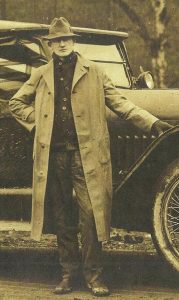 Layton Harold Lowman was born on January 7, 1882 in Rayne Township, Indiana County, Pennsylvania, the son of John A. and Phoebe J. (Powell) Lowman. He received his early education in the District #7 Raynes Run School. The United States Federal Census of 1900 shows that Lowman was living at home at age 17 and his listed occupation was that of an artist.

At some point in time following the 1900 Census, he relocated to Dixonville and while living there obtained a marriage license on November 16, 1905 to marry Oscie O. Meekins of Cookport, Pennsylvania. The couple settled in Cherry Tree Borough, Grant Township. The Grant Township tax records show that his occupation was that of a photographer*. He and his wife remained here until 1909, at which time they relocated to a home in the Clymer R.D #1 area and remained there until about 1916, when they relocated to a home in Green Township.

On September 18, 1918, Lowman completed his World War 1 draft registration, showing that he was still living in the Green Township area but was by then an employee of the New York Central Railroad at Manver/Pine Flats. Green Township tax records indicate that Lowman remained a railroad employee until around 1922. 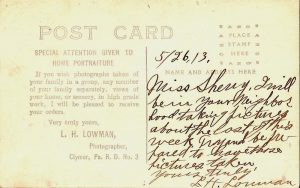 Sometime in the late 1920s or early 1930s, Lowman relocated to the town of Clymer, where he had a photography studio in the basement of the old Catholic School. He continued taking photographs in his studio and around the local area until his death.

Layton and his wife Oscie had seven sons and three daughters.

Lowman passed away at the age of 70 on September 27, 1952 at his daughter’s home in Clymer, and he was buried in the Bethel Lutheran Church Cemetery in Rayne Township.

*Layton’s older brother Wendell was also a photographer, but it isn’t known if he taught Layton the trade.