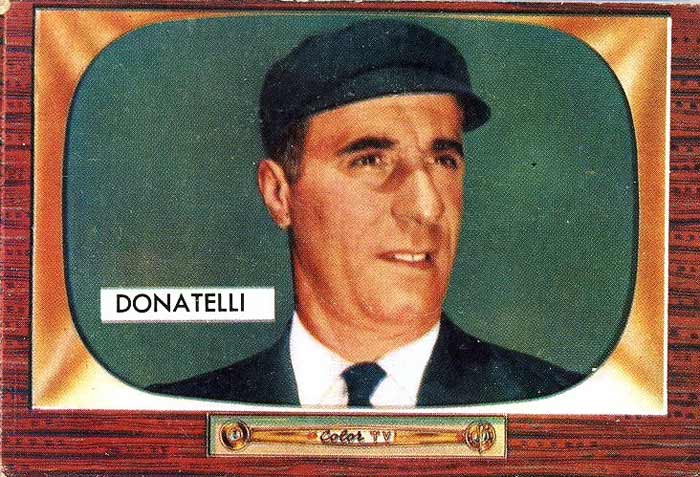 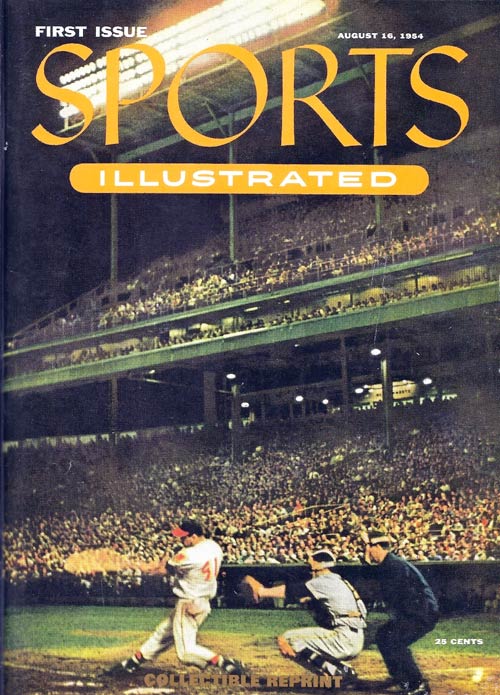 Augie Donatelli on the cover of the first Sports Illustrated (August 16, 1954) 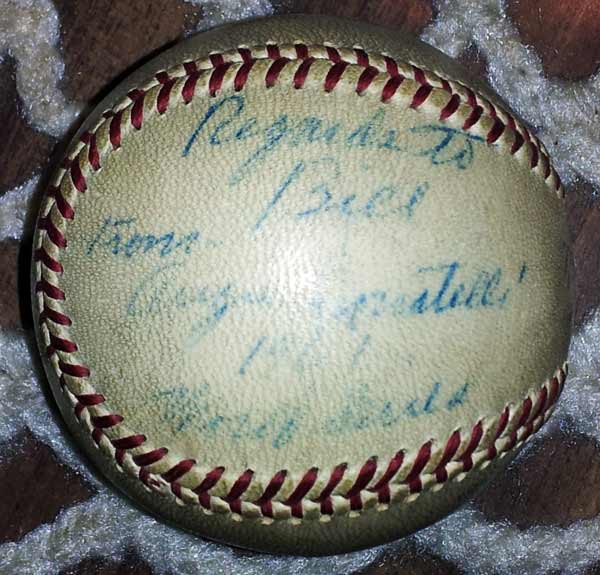 Baseball autographed by Augie Donatelli for a Heilwood resident (circa 1961)

August (Augie) Joseph Donatelli was born in Heilwood, Pennsylvania on August 22, 1914 to Antonio and Virginia Donatelli*, who had lived in Heilwood since 1910. In 1915, the family  moved to Bakerton, Pennsylvania where Augie was raised.

Donatelli began working in the mines sometime around age 17. Working at either the Sterling Mines or the Barnes & Tucker Lancashire #15 Mine in Cambria County until 1938, Augie decided to try out for a minor league baseball team.

Playing for the Beaver Falls Browns of the Class D Penn State Association, the 24-year-old Augie appeared in 14 games, but decided to return to the coal mines.  While working in the mines, he continued his playing career as an infielder in a local industrial league.

On January 6, 1942, Augie entered military service with the Army Air Force.  Stationed at Kimbolton, England with the 527th Bomb Squadron, he was a tail-gunner on a Boeing B-17G Flying Fortress. On his 18th mission (March 6, 1944), his plane was shot down while performing the first daylight raid over Berlin. He parachuted from the damaged aircraft but fractured his right ankle while landing. A short time later he was captured by the Germans and placed in Stalag Luft IV, where he remained for 14 months. In the prison camp, Augie began to umpire softball games, since his ankle injury prevented his participation as a player. On May 12, 1945, the prison was liberated by the Russian army.

Upon returning to the United States, Augie wanted to return to baseball, but he knew he couldn’t make it as a player. Instead, he turned to the next best thing – umpiring. He attended the Bill McGowan umpiring school in Daytona, Florida and began his career behind the plate in the South Atlantic League. In 1950, Augie made it to the major leagues as an umpire in the National League (see photo).

His first National League game was at the Polo Grounds in New York City with the New York Giants facing the Boston Braves. Over the next 24 seasons, his career led him to umpire in five World Series and four all-star games. He was behind the plate for four no-hitters, Stan Musial’s 3000th hit, and the four-home-runs game by Willie Mays. Augie also had the distinction of being on the first cover of Sports Illustrated in August 1954 (see photo).

Retiring in 1974, Augie and his wife Mary moved to St. Petersburg, Florida. He passed away in his sleep on May 24, 1990 at the age of 75 and was buried at Bay Pines National Cemetery in Bay Pines, Florida.

*The 1910 Federal Census has the family name spelled as “Donotetti’.