An oil lamp used in the Heilwood coal mines

Anemometer used in the Heilwood mines, made by John Davis & Sons of Baltimore, Maryland

Certificate of Service from Industrial Colleries (1938) 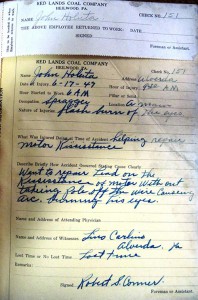 The following statistics were taken from the Pennsylvania Department of Mines annual reports for the bituminous regions. The annual reports became less comprehensive following the 1918 report; for example, the number of mining machines and details about accidents and fatalities were not included.